An American in Paris Blu-ray Review 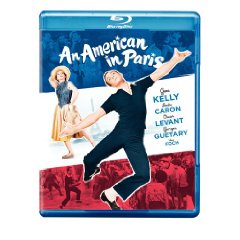 A GI (Gene Kelly) stays in Paris after the war to become an artist, and has to choose between the patronage of a rich American woman (Nina Foch) and a French gamine (Leslie Caron) engaged to an older man. The plot is mostly an excuse for director Vincente Minnelli to pool his own extraordinary talent with those of choreographer-dancer-actor Kelly and the artists behind the screenplay, art direction, cinematography, and score, creating a rapturous musical not quite like anything else in cinema. The final section of the film comprises a 17-minute dance sequence that took a month to film and is breathtaking. Songs include “‘S Wonderful,” “I Got Rhythm,” and “Love Is Here to Stay.”

‘An American in Paris’ provided a picturesque backdrop throughout the movie – the small room Gene Kelly lived, the café he frequented, the cobbled streets children danced on. However as the plot unfolds, the duet performance she and Gene Kelly gave is pleasing to the eyes and her ballet training lends a lightness in the moves she makes.

Leslie Caron was a young ballet dancer in the mid to late 1940s and in this, her acting debut, she teamed up with dance legend Gene Kelly in this Oscar winning 1951 musical. Parenthetically, Caron was in another best picture winner a few years later (Gigi). Early in the movie, there is a ballet scene featuring Caron and at the end of the movie, there is a spectacular ballet, lasting 17 minutes or so, with Kelly, Caron, and a large cast of additional dancers. This scene is a fantasy of Kelly’s as he pines for the girl he believes he just lost.

The plot of the movie is basic but, then again, what makes the movie great are the music and dancing, not the story which it is lacking. Kelly and Caron are drawn to others through circumstances but they love each other. Caron has a fiancee who sheltered her from the Nazi’s during WWII while struggling artist Kelly has a female patron who is enamored with him. The plot is the resolution of this whole love entanglement. Oscar Levant also plays a major role as a musician who has a flat in the same building that Kelly lives in.
Movie Content: 7.5/10

The print is presented in 1080p/VC-1 with a 1.33:1 aspect ratio. Warner has been doing a great job with their classics on high definition as they churn out yet another winner. I was surprised as to how great the film turned out with their engineers going back fully remastering the film with their Ultra-Resolution Restoration process. Colors are visually appealing providing an eye catching image for a 58 year old film.  There are times throughout the transfer where the image does have a softness. Fleshtones look natural except for a few scenes with the makeup use in this era jump out in high definition. Black levels have a nice depth. All this comes together for some very nice details that caught me off guard. The print has been cleaned up with no apparent print damage which is impressive. Albeit a few minor issues, this is a fantastic looking print for a film of this age.
Print Quality: 8/10

The audio is presented in Dolby Digital 1.0 mix. While some may wonder why didn’t they include a TrueHD 5.1 or Dolby Digital 5.1 mix, Warner did also restore the audio in its mono format. This is something that will for sure please purists. This is a film that will not rock the house from an audio standpoint that won’t take advantage of the soundfield. Dialogue comes through the center rather clean and crisp.
Audio Quality: 8.5/10

Warner rolls out the special features in this 1951 classic as if it were a newer film. Since Laserdisc and DVD were released, films are getting a nice plethora of supplements that weren’t possible before. There are only two features which are in high definition.
Special Features: 8.5/10

While I am not a huge fan of musicals, ‘An American in Paris’ is an enjoyable film albeit the story not holding up so well in 2009. Fans of the film will be more than happy with picture and audio on this Blu-ray, plus add a nice amount of supplements making this a nice upgrade.
Overall Rating: 8/10