Posted in DVD Reviews by George Theofanopoulos on 02 February 2009

Horror films this past decade have really been across the board in terms of quality and providing that scare, creepiness factor. When many people about clowns in a horror movie, it scares the life out of them. Since films like ‘Killer Klowns from Outer Space’ and ‘IT’, there has been a very creepy feel about clowns in films. To take things even further, how can we forget about the murderer John Wayne Gasey who would dress as a clown.

Clowns are a very hard thing to screw up with horror films. Just the creepiness around them is enough to make you jump out of your skin. The problem here is that while ‘Amusement’ has a few good scenes, the film has a similar feel to ‘Joy Ride’ and ‘Darkness Falls’ with a clown in the mix. One of the problems that I had was that director John Simpson didn’t build the needed suspense to make the viewer fear the clown.

The story begins with Shelby (Laura Breckenridge) on a trip with her boyfriend Rob (Tad Hilgenbrink) to Cincinnati. They make a pit stop at a gas station when Rob goes inside, Shelby stares at a truck drivers back cabin window. She sees a woman’s ghostly face quickly disappear back into the truck. This alarms Shelby, so she gets into a panic mode which ends up getting herself into some trouble.

Then the story switches to Tabitha (Katheryn Winnick) who has come over to her aunts and uncles house so she can babysit her younger cousins. These cousins of hers are a set of menaces that made the previous babysitter leave. A stranger shows up to their door knocking which prompts Tabitha to open the door. He begins asking her questions, yet she doesn’t feel like something strange is occurring. Considering that the guy has a hooded raincoat covering his face as he stands a few feet away from her.

At this point we have fairly seen three different stories, yet they still feel similar to the viewer. By the time the film reaches towards the end, there isn’t enough time to try and wrap things up. The ending sequence just doesn’t feel right either for a film that should have a creepy clown scaring the life out of the viewer. This film was to get a theatrical release, but has gone through all kinds of production hell.
Movie Content: 2/5 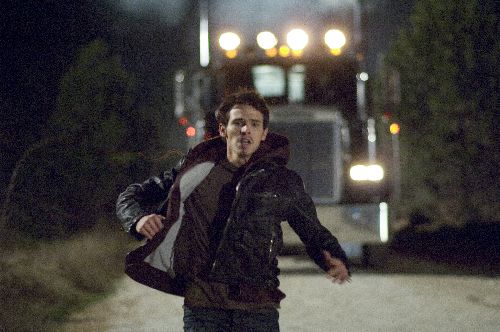 The print is presented in 2.40:1 anamorphic widescreen. The film is available in both widescreen and fullscreen on the same disc. While the film is not the greatest horror tale told, the video is looks pretty good for a film on DVD. Colors do not stand out as much due to the darker tone of the film. When there aren’t dark scenes, colors are strong.
Video Quality: 4/5

The audio is presented in Dolby Digital 5.1 mix. While this film doesn’t take fully advantage of the soundfield as I would have expected, it does a decent job meeting expectations. Dialogue is clear through the center channel. This is a more front heavy presentation. That is a shame because the audio here could have made this a tad bit better film with positioning effects properly.
Audio Quality: 3/5 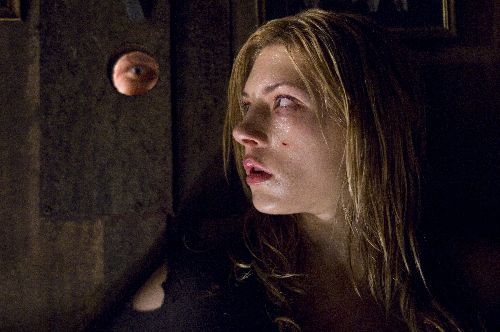 ‘Amusement’ could have really been a much better film if it wasn’t stuck in limbo for several years without being released. This is one of those horror films that just looks like many scenes were pieced together which is a shame. I can’t even recommend this as a rental, save your hard earned dollars.
Overall Rating: 2/5

« Everybody Wants To Be Italian DVD Review
Unfaithful Blu-ray Review »