We were forged in God’s image, but the Gods are also made in ours — and in Season Two the battle moves inexorably toward crisis point as the destinies of gods and men collide. While Mr. World plots revenge for the attack against him in Season One, Shadow throws in his lot with Wednesday’s attempt to convince the Old Gods of the case for full-out war, with Laura and Mad Sweeney in tow. A council at the House on the Rock explodes into chaos, sending deities both Old and New on quests across America that will converge on Cairo, Illinois: forcing Shadow to carve out a place as a believer in this strange new world of living gods — a dark world where change demands commitment, and faith requires terrible sacrifice. 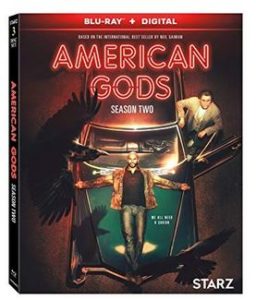 The vivid imagery reminded me of the ‘Hannibal’ and indeed Bryan Fuller has laid hands on both projects and the imprint of his doing as always surprises the eye. Will the visuals be the only good side of the series or simply a cozy clothes for a beautiful story is the main question here.

The answer goes straight away: the idea is impressive and intriguing and shall I say extremely deep. That might be its problem – the high projects suffer from everlasting talks and multitudes of storylines that are just not interesting.

The main thread is unnaturally captivating with the plot and the oozing charisma of Ricky Whittle and Ian McShane keeps sucking your attention better that the vacuum cleaner they try to sell you in the ads. On the other hand, the presence of stray, as it may seem at first, narratives confuses you and only the style reminds you that you are still watching ‘American Gods’.

The print is presented in 1080p/AVC MPEG-4 with a 1:78:1 aspect ratio. This is yet another release from AB to present a demo quality experience. I watched this show on broadcast television when it originally aired, and this looks even better on Blu-ray. Colors are vivid and provide impressive depth that pops off of the screen. The use of colors like red really makes this a visual experience even worth checking out if you are not interested in this show. Black levels are deep and inky. There is some subtle hints of grain throughout the presentation but never make it a hindrance. With such a wonderful presentation on Blu-ray, the world of American Gods comes to life.
Print Quality: 9.5/10

The audio is presented in a Dolby TrueHD 7.1 mix. Just like the image quality being impressive, the audio is right up there as being demo worthy. I was very impressed as to how dynamic sound effects were presented in the soundfield. There are plenty of panning effects that will catch the viewer’s attention almost immediately. There is a lot of action over the course of the first season. While this film does have its aggressive audio for effects and soundtrack, dialogue is also excellent. Dialogue is channeled through the center with no apparent issues as the audio was clean and crisp. Then add a soundtrack with some a wonderful score and you have a runaway winner.
Print Quality: 9.5/10

Still contemplating the things that I’ve seen I would say that the desire to watch the third season is weak but there, however, the curiosity to read the original book has caught the wave and something is telling me that it will be an interesting ride.
Overall Rating: 6/10