Posted in DVD Reviews by George Theofanopoulos on 04 May 2011 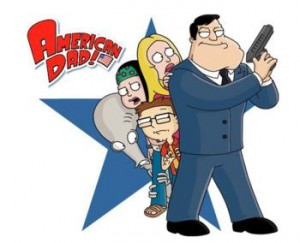 From the demented comic minds of Mike Barker, Matt Weitzman and Family Guy creator Seth MacFarlane comes another hilarious volume of star-spangled insanity — including Stan battling the Antichrist in the outrageous “Rapture’s Delight” episode! Bumbling CIA operative Stan Smith will stop at nothing to defend everything that makes this country great — from strip bars to that most sacred of American institutions, The Goonies! Whether he’s trading brains with a racehorse or rescuing Roger from bloodthirsty revolutionaries, Stan will do whatever it takes to secure the blessings of liberty in this over-the-top salute to the greatest nation on Earth. 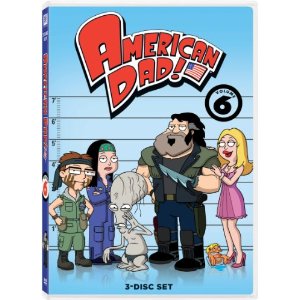 Every episode on this set is great. Can’t think of any that I really didn’t like. The season premeire “In Country… Club” is one of my favorites. Very clever episode(using golf carts as helicopters in a Vietnam War reenactment). “May the Best Stan Win” was also very funny. Love the futuristic cyborg version of Stan with a Canadian/Mexican accent. But perhaps the best episode ever is “Rapture’s Delight”, the 2009 Christmas episode. The 2nd half of the episode where Stan and Jesus turn into B-movie action stars who journey to defeat the anti-Christ while uttering terrible puns is hilarious. One of Stan’s best lines ever comes in this episode: “I guess I just picked a whole bouquet of oopsie-daisys.”

Starting with the first episode of 2010 “Don’t Look a Smith Horse in the Mouth”, this episode and every episode after it on the list above are shown in a Widescreen format.

Awesome set of episodes. 18 episodes is the most since Volume 3 and this is probably the best Volume of American Dad! since Volume 2.

Let me just say that I am glad that they finally have decided to release a full season. In the past, though the sets and features were great, we only got partial seasons. However, Volume 6 features all 18 season 5 episodes. Hopefully they keep it this way and release full seasons in the future.
Overall Rating: 9/10