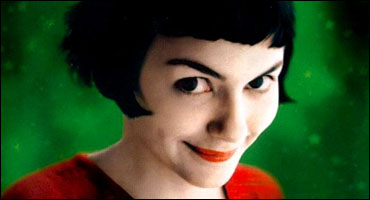 Perhaps the most charming movie of all time, Amélie is certainly one of the top 10. The title character (the bashful and impish Audrey Tautou) is a single waitress who decides to help other lonely people fix their lives. Her widowed father yearns to travel but won’t, so to inspire the old man she sends his garden gnome on a tour of the world; with whispered gossip, she brings together two cranky regulars at her café; she reverses the doorknobs and reprograms the speed dial of a grocer who’s mean to his assistant. Gradually she realizes her own life needs fixing, and a chance meeting leads to her most elaborate stratagem of all. This is a deeply wonderful movie, an illuminating mix of magic and pragmatism. Fans of the director’s previous films (Delicatessen, The City of Lost Children) will not be disappointed; newcomers will be delighted. 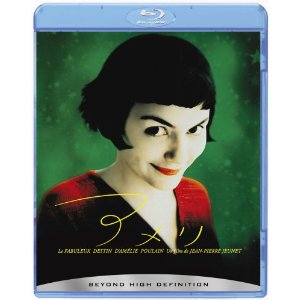 From director Jean-Pierre Jeunet comes the charming romantic comedy “Amelie”, a film that greatly transcends it’s genre. Romantic Comedies are a dime a dozen here in the States, but Jeunet has crafted a very quirky, fun and visually pleasing film that delivers comedy and romance both in spades without ever feeling cheesy or familiar.

Ameile Poulain is a shy and reserved 23 year old girl who had a rather odd childhood. Her mother was killed when a suicide jumper landed on her and father, though a good provider and kind person, never showed Amelie much affection, erroneously diagnosing her with a heart condition and having her homeshooled. Truth be told, Amelie’s heart would race when her father would medically examine her, leading him to believe she had a heart condition. In reality, affection was what cause her excitement.

There’s a timeless feel to “Amelie”, it’s a feel-good film that makes the viewer feel hopeful. The musical score by Yann Tierson fits the images like a glove and is very memorable and unique. This is one of those rare films where everything just falls into place. I highly recommend it to any fan of cinema, regardless of taste. When you invite Amelie into your world, she won’t be forgotten. Like she did for the characters in the film, she might just change your life. After all, theres a little Amelie Poulain in all of us.
Movie Quality: 9/10

The print is presented in 1080p/AVC MPEG-4 with a 2:35:1 aspect ratio. I found this print to be rather eye pleasing with vibrant colors. Fleshtones are very natural and accurate, considering that we see a few bare necessities throughout. Black levels are solid throughout. The image was also sharp with excellent details. The image is clean and pristine making this a very nice looking image.
Print Quality: 9/10

The audio is presented in a DTS-HD MA l0ssless 5.1 mix. This film is a dialogue driven film. Dialogue was clean through the center channel with a nice degree of depth. I never had to raise or lower the volume to make out what was being said. The soundfield does get a few effects into play, but nothing major. The soundtrack takes advantage of the soundfield with audio also lightly pouring through the rears. I found this to be more of a front heavy experience due to the type of film.
Print Quality: 9/10

I was really happy with this movie. I showed it for an international movie night and the cinematography was different then what is seen in American movies and I really like that.
Overall Rating: 9/10