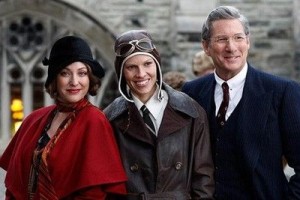 With her lanky Middle-America looks and her toothy grin, Hilary Swank is a natural fit for the adventurous figure of Amelia Earhart, the world’s most famous aviatrix. Amelia ticks through the major achievements of Earhart’s career: her 1928 flight across the Atlantic (as a passenger, not a pilot), which made her the first airborne woman to make the trip; more triumphantly, her 1932 solo transatlantic journey; her marriage to publisher George Putnam; and of course the mysterious 1937 around-the-world flight that ended in her vanishing, with engineer Fred Noonan, somewhere near Howland Island in the mid Pacific. With Swank in her pilot togs and director Mira Nair at the helm, the project would seem to have the ingredients for success, but the resulting film is a truly dull, almost featureless affair. The big flights themselves have innate appeal, but otherwise the emphasis is on Amelia’s love life, shared between Putnam (Richard Gere) and the dashing Gene Vidal (Ewan McGregor)–who, the film clumsily keeps reminding us, is the father of Gore Vidal, seen here as a precocious tyke. A smidgen of Amelia’s proto-feminist attitude is included, including her intriguing take on her marriage agreement, but nothing actually cuts deep or generates interest. After a while Amelia becomes a series of events, told with less excitement than the average documentary on the same subject, albeit with prettier photography. 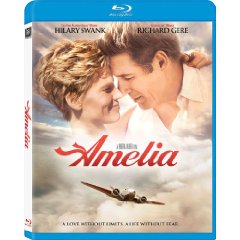 “Amelia” is not a documentary but dramatic excellence in telling the story of the emotion and energy in a quest for achievement. That impacts the life of one couple from 1928 to 1937. Amelia Earhart (Hilary Swank; Freedom Writers) has a dream, a goal, a focus, a destiny. George Putnam (Richard Gere; Nights in Rodanthe & Shall we Dance) strives a decade toward her quests. Touching, and exhilarating, but not really a romance. More like historical relationship.

The movie begins June 1, 1937, with wonderful orchestra music blending into the magical set of the thirties. Immediately were flown back to 1928 in this portrayal of emotion and personal challenge, written through the inspiration of TWO books: “The sound of Wings,” Mary S. Lovell & “East of the Dawn” by Susan Butler. It’s not about depicting the history of Earhart’s flight achievements; freedom for women [although it does a fine job there]; or the romantic life she had. It is Amelia’s interaction of feminine spirit and exuberance for flying, against her disdain for publicity and financing that necessarily accompanied that, which lifts-off this story into stardom. Flying was often more important than her marriage relationship. What a top-flight job Swank did as Amelia, capturing her aerial soul.

Gere did an equally masterful job as Putnam, serving as Amelia’s financial support and eventually onward to that of a mate wanting to see his spouse fulfill HER dreams. Each nuanced step of the way, in this 9-year period movie time span, is powerfully portrayed by Gere through his acceptance of non-conventional vows to his escalating fear of losing Amelia in her each new higher-achieving flight.
Movie Quality: 9/10

The print is presented in 1080p/AVC MPEG-4 with a 2.35:1 aspect ratio. I found this print to be rather eye pleasing with vibrant colors. Fleshtones are very natural and accurate, considering that we see a few bare necessities throughout. Black levels are solid throughout. The image was also sharp with excellent details. The image is clean and pristine making this a very nice looking image.
Video Quality: 9.5/10

The audio is presented in DTS-HD MA lossless 5.1 mix. This film is a dialogue driven film. Dialogue was clean through the center channel with a nice degree of depth. I never had to raise or lower the volume to make out what was being said. The soundfield does get a few effects into play, but nothing major. The soundtrack takes advantage of the soundfield with audio also lightly pouring through the rears. I found this to be more of a front heavy experience due to the type of film.
Audio Quality: 9/10

All in all, despite any quibbles I may have, I feel that Amelia is worthy of viewing. The cinematography is excellent, the period costumes are gorgeous, and the story is inspiring. The video and audio presentation are very good on Blu-ray which will not leave fans of the film disappointed.
Overall Rating: 8.5/10