Alvin and the Chimpmunks: The Squeakquel Blu-ray Review 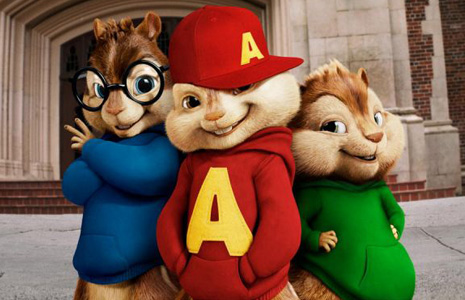 Dave (Jason Lee) isn’t exactly the typical father figure with an average family, but he cares deeply about his adoptive chipmunks Alvin (Justin Long), Theodore (Jesse McCartney), and Simon (Matthew Gray Gubler). While the performing life presents its own unique challenges, Dave always does his best to instill a sense of compassion and familial love into his young charges. When Alvin begins to get a little too caught up in his own stardom, Dave reminds him to share the spotlight with his fellow chipmunks, but Alvin gets carried away and ends up inadvertently injuring Dave on location in Paris. Aunt Jackie (Kathryn Joosten) steps in to look after the Chipmunks, but when her wheelchair rolls down a flight of stairs, only her irresponsible grandson Toby (Zachary Levi) is left to watch over the boys. An unemployed video gamer who lives with Jackie, Toby is completely unprepared for the responsibility of caring for the Chipmunks, but he agrees nonetheless. 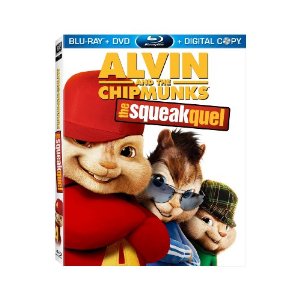 I liked the new girl group the Chipettes, who had the potential to breathe some new life into this classic cartoon, but they were sparingly used. There should have been a lot more music because that’s when the movie came to life. Other than that it was mostly mayhem, bullying, and fart jokes. Is it funny to see a woman in a wheelchair fall down the stairs? No. Is it funny to see the Chipmunk’s human “father” Dave get put into traction? No. Is it funny to see Simon get bullied by a toilet swirlie or get bashed with a dodge ball by the popular boys at school? No.

The movie’s script is really lazy–the kind of film where the villainous record producer (who was actually pretty funny at times, because he went for total ham and cheese with his comic humiliation) says, “I need to find more singing chipmunks,” and then the next scene shows the three incredibly talented and cute female Chipettes FedExing themselves to him to ask him to make them singing stars. That was easy.

The character Alvin is supposed to have attitude but I found him really grating. But the thing that really makes me give this movie one star is that the all of the human actors deserve better. Jason Lee (who is really only in it for 5 minutes, good for him I guess), Wendie Malick, Zachary Levi, David Cross, Kathryn Joosten make up an eclectic and talented cast and it pained me to see them acting into the air opposite animated chipmunks. (I kept thinking that Wendie Malick must have been jealous of Christine Baranski’s scene stealing role in “Mamma Mia.” Here Malick is stuck with the indignity of playing a school principal who secretly sports a chipmunk fan tattoo. Yuck.) And the celebrity voices of the chipmunks were totally wasted, Justin Long, Amy Poehler, Christina Applegate…they are unrecognizable anyway.

The CGI animation of the chipmunks is good, but that’s not necessarily a good thing. The previews before the show included two more awful-looking CGI animal movies coming soon to a theater near you, “Furry Vengeance” with Brendan Fraser and Brooke Shields, in which Fraser is farted on by skunks and locked in a porta potty by furry woodland animals, and “Cats & Dogs: The Revenge of Kitty Galore” a cats and dogs spy movie with Chris O’Donnell. Quick, someone write a better screenplay for these beloved stars of the ’90s and ’00s, and invite the cast of “Alvin and the Chimpunks,” too!
Movie Content: 7/10

The print is presented in 1080p/MPEG-4 with a 2.35:1 aspect ratio. I found the Colors to be very well done, yet I had an issue with the CGI not properly matching the print. This time around the film looks like a cut and past job with the chipmunks at times when compared to the first film. I am not too sure if it has to do with a lower budget or not. Details are very good and there is depth to the image. The print is rather clean throughout without an blemishes.
Video Quality: 8.5/10

The audio is presented in DTS-HD MA lossless 5.1 mix. his is a film where the soundtrack sounds very good taking advantage of the entire soundfield with the various songs played in the background and anytime the chipmunks sang. Bass is rather deep; there is a nice dynamic range of sound across all speakers. Dialogue is very clear and well balanced through the center channel.
Audio Quality: 9/5

One good film deserves a sequel–Or Squeakquel, in this case. Unfortunately, for some of the audience, the second film does not necessarily live up to the fun of the first.
Overall Rating: 6.5/10