Based on the award-winning graphic novel series by Grant Morrison, this DC Universe Animated Original Movie posits the ultimate question for Superman fans–how would the Man of Steel spend his final days on Earth?–in a unique and genuinely thought-provoking feature film. Exposed to solar radiation by Lex Luthor (voiced by Anthony LaPaglia), Superman (James Denton) learns that he is dying, and devotes his remaining time to Lois Lane (Mad Men‘s Christina Hendricks), to whom he grants 24 hours of super powers. Their bittersweet finale is interrupted by a host of villains, including the Parasite and the supercomputer Solaris, as well as Luthor himself, who uses Superman’s own powers against his archenemy in one final battle. The action is plentiful and sprawling against a densely plotted backdrop, but what sets All-Star Superman apart from other DCU features is what made Morrison’s source material so special: how does one man–even one as invincible as Superman–seek to define his life and legacy? The late Dwayne McDuffie’s script addresses the subject in mature and fulfilling terms, while the vocal cast, which includes Ed Asner (as Perry White), Arnold Vosloo (Bar-El), and Frances Conroy (Martha Kent), present a range of performances that compare favorably to the Tim Daly/Dana Delaney-led cast of Superman: The Animated Series. The single-disc edition is light on extras, with only previews of DCU’s Green Lantern: Emerald Knights and Superman/Batman Apocalypse on the disc. 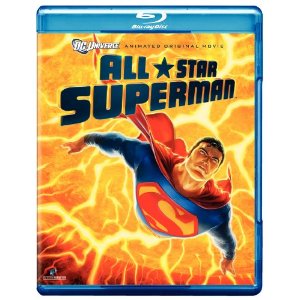 All Star Superman the movie pales in comparison to the 12 issue story arc written by Grant Morrison and drawn by Frank Quitely. Although Dwayne McDuffie ( R.I.P.) tries to recreate the magic from the pages of the comic book he can’t within the limited run time of the film. The film feels disjointed for that very reason . It has a stop start feel to it and leaves the viewer a bit confused at points. Morrison’s All Star Superman was his big tribute to the character and really told the story of the most powerful man in the universe becoming even more so at the ultimate cost.

We get glimpses of how Superman spends his final days but we really don’t get into his head the way we need to , to understand what all this means to him . Again this is not an indictment on McDuffie. The assignment to recreate this story was always an onerous one.

Not everything is bad about this film, i do love the recreation of the Superman theme as well as the animation. McDuffie also captures a small fragment of the Lex/Superman dynamic that does make for a few fun scenes in the movie. Also there is a line uttered by Lois in the film that is a simplified version of the one Morrison thought up for the book that resonated for me . It reflected Superman’s selflessness and that eternal love they share. I used part of it in my review title.

The print is presented in 1080p/AVC MPEG-4 with a 2:35:1 aspect ratio. Some parts of this animation are impressive, while others the CGI does not look as good. The problem is that with a lower budget certain areas will suffer. This is a very colorful film that is vibrant and pops. With a strong color palette, it brings out the fine details. Black colors are deep looking. Taking all these strong elements, they produce one sharp looking picture. My only complaint again is just some of the CGI not looking up to par.
Print Quality: 8/10

The audio is presented in a DTS-HD MA lossless 5.1 mix. With this mix, all my speakers were working for their money. The dialogue comes out of the center channel very clean and crisp. I found the balance to be mixed very well between the soundfield and dialogue. I am glad that finally more and more releases on Blu-ray are coming with well balanced audio mixes.
Print Quality: 9/10

This story is presented as a real movie that adults and children will enjoy equally! This, in my opinion, is what makes it unique, and destined to become a classic among animated films. It is not biased to the action side of super heroics (as most of the DC animated films have been) and it is not a soap opera dwelling in drama. The movie captures action and drama with ease, and keeps the audience engaged for the entire ride.
Overall Rating: 8/10