All Dogs Go To Heaven is a musical, animated exploration of the fundamental conflict between good and bad and of the notions of caring and friendship. While all dogs may be welcome in heaven, the open admission policy doesn’t necessarily ensure that a dog is worthy of, or even ready to accept his heavenly blessing. When criminal dog Charlie Barker (Burt Reynolds) and his sidekick Itchy (Dom DeLuise) escape from the dog pound, it isn’t long before they realize that former business partner-in-crime Carface (Vic Taybak) has turned against them. Carface puts a permanent end to the partnership by killing Charlie, but Charlie ascends to heaven only to spurn his promised life devoid of surprises and fight to return to a life of vengeance, danger, and adventure on earth. When Charlie realizes that Carface has been using the animal-talking talents of young orphan girl named Anne-Marie (Judith Barsi) to further the success of his gambling business, Charlie steals her away and starts his own lucrative business venture. Charlie and Anne-Marie begin to become friends, but Anne-Marie’s strong sense of what is right conflicts with Charlie’s complete lack of moral standards and puts their friendship at risk. Worse, Charlie’s quest for revenge threatens his own life as well as the lives of his friends Anne-Marie and Itchy. 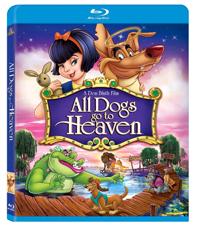 Around the late 1970’s, animator Don Bluth, frustrated with the output his company, Disney was churning, defected from the Mouse House to form his own studio. His first production, THE SECRET OF NIMH, was a brilliant feature that still holds up well to this day. This was followed by AN AMERICAN TAIL and THE LAND BEFORE TIME, both of which were made under the involvement of Steven Spielberg and were commercially successful. Although none of those two films had the dark adult appeal of NIMH, they still are very charming, enjoyable features for both children and grown-ups. But before long, Don Bluth had his first major misfire with ALL DOGS GO TO HEAVEN; critics were especially harsh on this film, and matters weren’t helped by the fact that it opened alongside Disney’s THE LITTLE MERMAID.

Considering that the movie has such a friendly-sounding title, one would expect ALL DOGS GO TO HEAVEN to be pleasant family fare. Instead Bluth provides a surprisingly dark story involving gambling, deceit, crime, mistreatment, and murder. That itself is not a problem for an animated feature per say, but it does call into question over whether the film is for children. On the other hand, it’s hard to say whether adults will find much to enjoy in ALL DOGS GO TO HEAVEN. In short, it’s a movie with a major identity crisis.

Set in a dreary junkyard of New Orleans, the movie starts out when Charlie B. Barkin, a rough-and-tumble German shepherd, is run over by a car courtesy of his former gambling casino partner, a nasty, cigar-puffing pitbull, Carface. Before you know it, Charlie finds himself in heaven, albeit by default. Here a whippet angel, Annabelle, tells him that “all dogs go to heaven because unlike people, dogs are usually loyal and kind.” This line represents the confused nature of the movie, since the dogs in the movie, the whippet aside, are presented as anything but.

Upon realizing that he’s been murdered, Charlie steals his way back to Earth and plots to get even with Carface. With the reluctant help of his dachshund pal Itchy, Charlie “rescues” Carface’s prize, AnneMarie, a human girl who can talk to animals (in order to predict who will win the rat races). Charlie claims that he will help the little cutie find her a family, but in reality he is using her skills to win fortunes at the race so that he can build a more elaborate casino of his own to bring Carface down. Although he refuses to admit it, Charlie does grow to love AnneMarie…

The concept of the story isn’t as problematic as the execution. Aside from the human girl AnneMarie and a flamboyant musical alligator who appears about three-quarters through (with the vocal pipes of Ken Page), none of the other characters emerge as likeable, nor frankly, are even worth caring about. Unfortunately, that also applies to Charlie; in trying to make him an anti-hero, the script (composed by more than ten writers) only succeeds in rendering the character TOO unlovable. As such, the audience feels no empathy for Charlie, and worse, his redemption at the end of the movie does not come across as convincing.
Movie Quality: 8/10

The print is presented in 1080p/AVC MPEG-4 with a 1:85:1 aspect ratio. ‘All Dogs Go To Heaven’ uses the original aspect ratio of 1.85 as previous releases on DVD have not. Getting the good out of the way, this print doesn’t look too well on Blu-ray. If this is print is consistant about one thing, it has to do with looking very murky and being full of issues that keep this from being a stellar release of the film on high definition. There is dirt and white specs throughout the entire film. Details do not look much better, except in a few scenes where they look above average. Colors are not that strong for an animation that I expected to look strong, yet this is more of a softer looking image.
Print Quality: 6/10

The audio is presented in a DTS-HD MA lossless 2.0 mix. This is yet another release with a DTS-HD 2.0 mix from MGM and while it suits the material, it just lacks a lot of that oomph. I just did not feel like the audio was mixed well for this release. It was way too soft for being a front heavy experience and even worse is that the dialogue through the center channel is almost way too soft. If anything, this is the most disappointing part of this while release on Blu-ray is the audio.
Print Quality: 3/10

A well done film throughout, which spawned a mediocre sequel and animated series. However, there’s no substitute for the original, which is one of the best animated movies to come out of the 90s period. Children will love it, and adults will be able to watch it without feeling too ill or out of place, and those that grew up on it, probably still hold it close to their hearts. On Blu-ray, the audio and visual portions including the special features is lackluster.
Overall Rating: 4/10