Aliens in the Attic Blu-ray Review 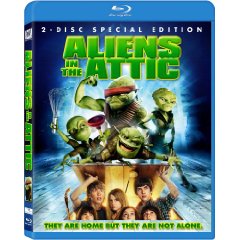 It’s summer vacation, but the Pearson family kids are stuck at a boring lake house with their nerdy parents. That is until feisty, little, green aliens crash-land on the roof, with plans to conquer the house AND Earth! Using only their wits, courage and video game-playing skills, the youngsters must band together to defeat the aliens and save the world — but the toughest part might be keeping the whole thing a secret from their parents! Featuring an all-star cast including Ashley Tisdale, Andy Richter, Kevin Nealon and Tim Meadows, Aliens In The Attic is the most fun you can have on this planet!

The kids bring some charm to the film. You have Carter Jenkins playing the very intelligent Tom Pearson, but in the beginning, tries to shave off his “book smarts” because it’s not cool and in the end, I personally though the message with his character was quite positive for children. Being smart doesn’t mean you’re not cool. Austin Robert Butler as Jake Pearson, the child who thinks combat/strategy is a predictable gung-ho character (especially when he owns an expensive paint ball machine gun, you know where that’s going).

Ashley Tisdale provides that young star power for those who are familiar with her Disney Channel TV shows or her films and also her music. But the shining star happens to be her boyfriend Robert Hoffman, who portrays the craziest role when he gets controlled by the aliens and later on by the kids.

The adults do not play a major role in this film. Sure, we have former “Saturday Night Live” cast members Kevin Nealon and Tim Meadows and “Late Show with Conan O’Brien” sidekick Andy Richter and also actress Gillian Vigman. But the adults do not really interfere in the film but you do get to see “Everybody Loves Raymond” actress Doris Roberts as the grandmother Nana Rose Pearson being mind controlled and the video game twins use her a fighting video game-like character. Sure, it’s corny but for fighting video game fans who recognize the fighting moves, you can’t help but laugh and root for grandma.
Movie Quality: 8/10

The print is presented in 1080p/AVC MPEG-4 with a 1.85:1 aspect ratio. The image quality is pretty good with colors being rather strong throughout. Blacks are rather solid and deep. Fleshtones look very natural with the proper lighting used with inside and outdoor scenes. I found the details to be good, but not overly great. With some of the CGI used in this film, the image wasn’t eye popping, but a suitable presentation. The print is pristine from any print damage.
Video Quality: 9/10

The audio is presented in DTS-HD MA lossless 5.1 mix. The surrounds are used much more than I expected with all the special effects giving the audio a nice atmosphere like presentation. Dialogue is rather clean through the center channel. This is a well balanced mix with dialogue and special effects. I didn’t have to adjust the volume at all during the film..
Audio Quality: 8/10

‘Aliens in the Attic’ is an entertaining film for the family, but not one that I would revisit anytime soon. Both the audio and video are good for this film in high definition as I didn’t expect anything glorious.
Overall Rating: 8/10