Posted in DVD Reviews by George Theofanopoulos on 23 February 2009 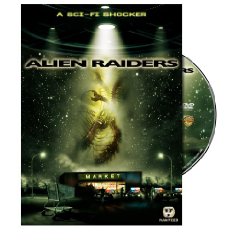 From Raw Feed, creators of the Rest Stop and Otis shockers, comes the sci-fi/horror tale Alien Raiders, a nerve-shredding battle for human survival against aliens that invade our world by invading our bodies. Be alert. Beware. Be afraid. The creatures’ next host could be your neighbor. Your kid brother. No – it’s you!

Produced by Dan Myrick (co-director of The Blair Witch Project, co-writer of Book of Shadows: Blair Witch 2, director of Solstice, The Believers, and The Objective) and directed by Ben Rock (Shadow of the Blair Witch, Conversations), Alien Raiders is WHV’s sixth acquired title from the successful “Raw Feed” film franchise.  “Alien Raiders explores the mystery, suspense, fear and tension behind mankind’s fight for survival against alien invasion,” said producer Dan Myrick. “It takes the ingredients of horror and suspense from previous Raw Feed installments and adds a science fiction element to increase the anxiety factor.”

A group of commando types invade and trap townsfolk in a grocery store on the search for a King Alien that is hiding in one of the shoppers. The story behind why it takes place in this location is on the minimum. The characters are not fleshed out as one would expect. There’s even an honest love story thrown in–which is never a good thing to be in horror, honest or in love!

The effects are very good, but don’t linger on the screen for too long. The pace is quick and the violence comes in spurts. The director, on a making of feature, states he wanted to make the goriest film of all time, but somehow he had to settle for more atmosphere and set-up. This is a good thing. Without relying on bloody special effects he made some moments really work, and when he does finally rip with the red stuff it’s more effective.

Don’t expect something totally original. This is just ready to please, B movie, Action-horror at its best. This could never play in the theaters and it never needs to, it wasn’t designed for it.
Movie Content: 3.5/5 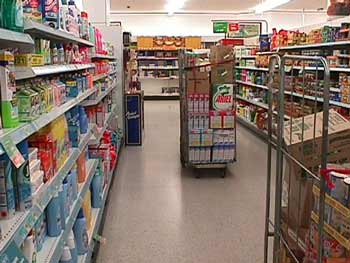 The print is presented in 1.85:1 anamorphic widescreen and looks very clean and colors were strong and bold giving the image pop. Blacks are strong, but not as deep as I would have expected. Flesh tones were natural. The print was pristine from any print damage or issues. The audio is presented in 5.1 Dolby Digital surround mix is active and loud.
Overall Quality: 3.5/5

There are some shades of John Carpenter in this film with ‘The Thing’ as an influence. Still it is worth watching, and if you are a SCI-FI fan. For a lower budget film, this also comes packed with special features.
Overall Rating: 3.5/5

« Videogame and Movie Ads The Week of 2/22/09
Alvin & Chipmunks: Mystery of the Easter Chipmunk DVD Review »