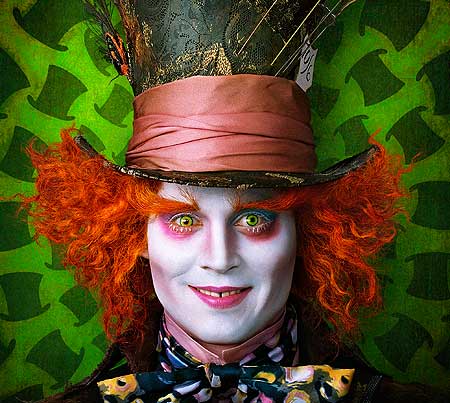 For this journey down the rabbit hole, Tim Burton is the driver and Johnny Depp the tour guide. Several film versions of Lewis Carroll’s two “Alice” books have been released almost since the beginning of the 20th century. By and large, they have not been box office successes, though Walt Disney’s 1951 animated feature has become perhaps the most iconic. 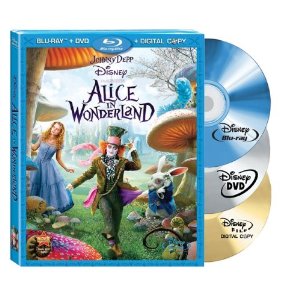 Disney’s new big screen version of Tim Burton’s vision of Alice in Wonderland, or “Underland,” gives us Johnny Depp once again creating an original persona to our sheer amazement, This film is the first mega-hit movie version of Alice ever, hitting the 1 billion dollar mark worldwide. It’s a testament to Johnny Depp’s astronomical star power within the right vehicle. It has also been accomplished not only through Burton’s artistry, but Linda Woolverton’s screenwriting (she penned Disney’s Beauty and the Beast, after all).

But they also had to change the story to make it work as a movie. Every filmmaker has struggled with the Carroll texts because, like dreams, they are random experiences with no arc. Walt Disney was the most successful, in my view, at staying faithful to the story without adding an arc (and Walt’s artists’ vision of the rabbit hole is still the best of all time).

What was done with the 2010 Alice in Wonderland was to make it a revisit, of sorts, with Alice at marrying age and at a crossroads in life. This is her second Wonderland visit, to bring her confidence and direction. It’s probably the most re-defined and altered story arc of any Alice adaptation to date (in the excellent Hallmark TV miniseries, Alice is afraid to recite a poem and the Wonderland characters give her moral support).

Alice, in this version, is a bit like the Pevensie children in The Lion, the Witch and the Wardrobe — sent by a prophetic destiny to rid the kingdom of an oppressive, deadly leader. The characters are given names (which my son loves: “It’s not the White Rabbit, Daddy, he’s McTwisp!”). Elements of the Carroll narrative (the rabbit hole, “drink me,” etc.) are still here, but eventually the new adventure takes hold and the film becomes an action fantasy.

By the time Alice, the Mad Hatter and the Dormouse reach the Queen’s castle, they’ve become a team more in the style of L. Frank Baum than Carroll — in fact, I expected Alice to tell the Hatter “I’m going to miss you most of all.” She even says a line similar to “and you were there, and you and you!” But I digress and perhaps spoil.

But you know what? It works. And it’s more akin to Disney tradition that it may seem at first, since Walt himself considered changing the Carroll story as well, and also almost made a live-action/animated version with Ginger Rogers. This film, with its blend of live actors, CG animation and motion capture, was virtually all performed in front of a green screen, a descendant of the live action/animated sequences in Mary Poppins and Bedknobs and Broomsticks.

The cast is marvelous, on screen and off. Mia Wasikowska suggests Hayley Mills, with a physical resemblance as well as a similar spunky yet sober attitude. Helena Bonham Carter is having a ball with a juicy, outrageous villain to chew on Red Queen. Anne Hathaway channels Snow White (watch those bent elbows) and Billie Burke as the White Queen. The voices of Stephen Fry as the Cheshire Cat, Michael Sheen as the White Ra– oops, I mean McTwisp are among the letter-perfect voice casting. And of course, there’s to Johnny Depp’s masterful, mercurial “Bozo-Blows-His-Big-Top,” yet somehow heartbreakingly sympathetic, Hatter.
Movie Content: 9.5/10

The print is presented in 1080p/MPEG-4 with a 1.77:1 aspect ratio. This has to be one of the most colorful animations that I have seen on Blu-ray. Due to the colors popping off of the screen, it brings out the fine details. Blacks are strong and almost inky at times. Nowhere did the image ever appear soft with such strong colors and black levels. Flesh tones were also natural. The image just pops throughout the entire presentation and was very colorful. The print is so colorful that you feel like it has that animation tone to it.
Video Quality: 9.5/10

The audio is presented in DTS-HD MA lossless 5.1 mix. While the rears don’t always get a lot of use throughout the film, they prove useful once the film’s score kicks in and anytime there are sound effects. What is rather impressive is the use of the center channel where all the dialogue comes through. All of the dialogue and signing pieces come through so clean that it is amazing with what can be done on the audio front.
Audio Quality: 9.5/10

And it still compliments the Walt Disney version without replacing it. There’s always room for another Wonderland, and the Walt Disney version will always be landmark, especially because of its Mary Blair look, classic voice cast and unforgettable songs. The visuals are excellent and this is an excellent adaptation of Alice in Wonderland that the whole family can sit down and enjoy.
Overall Rating: 9/10