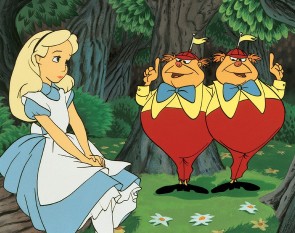 Walt Disney seems to have had a special affection for Lewis Carroll’s “Alice” stories. “Alice’s Wonderland” (1923), a short about a live-action little girl in a cartoon world, led to his first successful series, the “Alice” comedies (collected on Walt Disney Treasures: Disney Rarities–Celebrated Shorts, 1920s -1960s). During the early ’30s, he talked about making an animation/live-action feature of “Alice in Wonderland” with Mary Pickford in the title role. But almost two decades would elapse before Disney released his Alice. It’s the most uneven of the classic Disney features, juxtaposing brilliant and dull sequences. The Mad Tea Party, the Queen of Hearts’ Croquet Game, and Alice’s encounters with the Caterpillar and Cheshire Cat fuse the spirit of Carroll’s words, the vitality of the polished animation, and the stylized look and brilliant palette of designer Mary Blair. But the song “I Give Myself Very Good Advice” and the unsatisfying adaptation of “The Walrus and Carpenter” bring the story to a halt. Disney’s Alice in Wonderland remains a beloved film, and its better moments are truly magical. 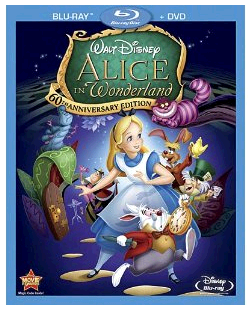 The digitally restored, high-def transfer is breathtaking in scope in that it seems not one frame was left un(re)touched and cleaned. The film sparkles with vibrancy and appears to have been shot yesterday. The colors seem to be as on-target and faithful as those in the Sleeping Beauty bluray. There is a 5.1 Dolby sound option that offers somewhat mixed results in the battle between modern sound-mixing techniques vs. 60 year old monaural masters. Purists can take it or leave; because a restored original monaural version is also offered on the disc.

There are actually few extras that weren’t seen in previous dvd releases, but this version trumps them all with its “Through the Keyhole” option. This is a very unique commentary/documentary that can be played during the entirety of the film. It offers informative and chatty on-camera interviews with Disney and Carroll historians, generous with little-seen artwork. It plays more like a feature-length documentary than a dvd commentary, is loaded with witty and interesting commentators and is something that I hope dozens of other bluray producers take to heart and attempt to recreate for future releases.

The 1:85:1 aspect ratio of the film is misleading and confusing to many, it seems. The film has not been cropped; it absolutely appears in its original aspect ratio. The widescreen format only refers to the film as seen in “Disney View” option, which is an extra that adds an illustrated frame on either side of the original film. (Similar frames were used on the Snow White and Pinocchio blurays). The frame was created solely to placate those persons who’d otherwise freak out at the sight of blackness on the vertical sides of their widescreen televisions while viewing a 1:33:1 film. Film purists and the not-so-easily annoyed will be more than happy to ignore this feature completely.

As to the question of whether to upgrade; well, it depends on what you want from this film and how high it is on your list. As I said, “Through the Keyhole” is almost like a feature unto itself, is interesting and is probably worth the price of the disc itself. Seeing “Alice” in high-def, of course, is a glorious thing: unseen details pop out for the first time, background characters spring to life and the colors and timing are unsurpassed. Therefore, I give the disc 5 stars, remove my hat for the Disney technicians who worked so hard on faithfully restoring this film and engineering it for bluray, and hope that you will join me in enjoying this release.
Movie Content: 10/10

The print is presented in 1080p/AVC MPEG-4 with a 1.33:1 aspect ratio. And as anyone who have watched any of the Walt Disney animated classics on Blu-ray, knows that Disney’s treatment has been nothing short of perfect. And because this classic is known for its colors, its animation and presentation, the picture quality of “Alice in Wonderland” is magnificent. I have tested this film on two different types of televisions and suffice to say, this film doesn’t look 60-years-old at all. Wonderland looks absolutely beautiful! Colors are vibrant and really come out with clarity and as always with Disney, their frame-by-frame restoration shows as there is not one blemish at all. Alice’s blue dress, the Queen’s red and black dress, the artistic backgrounds used throughout the colorful world, everything is full of detail.
Video Quality: 9.5/10

The audio is presented in DTS-HD MA lossless 7.1 mix. The lossless track sounds exquisite and because this film does feature a lot of music, this is the best I have heard of “Alice in Wonderland”. Dialogue and music is crystal clear, I didn’t notice any hissing, crackle or pop despite this animated film being 60-years-old. This release is the best I have heard of any video release of “Alice in Wonderland” thus far.
Audio Quality: 9.5/5

Well, if you want to go back to that place called Wonderland, full of adventure…it’s Underneath a Tree for a child, but it’s just Over the Hill for an adult. A Child discovers it, an adult returns to it, if they really try. Don’t expect Wonderland to come to you Over the Hill, go to it Over the Hill, and you will have reached it again. Love is waiting for you, do you want love?
Overall Rating: 9/10