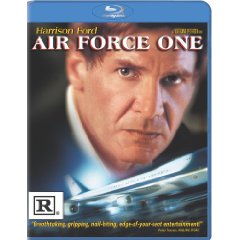 You know that old dramatic principle of suspension of disbelief? You’ll have to rely on it for this box-office smash, but you won’t be disappointed. Harrison Ford plays a U.S. president who single-handedly employs his rigid antiterrorism policy when a band of Russian thugs hatch a mid-flight takeover of Air Force One. Gary Oldman, who chews the scenery as the lead terrorist, will shoot a hostage at the slightest provocation. Glenn Close plays the sternly pragmatic vice president who negotiates with Oldman from her Washington seat of power. If you can believe that the aircraft’s pressurized cabin can sustain hundreds of rounds of machine-gun fire, you’ll buy anything in this entertaining potboiler, especially thanks to Ford’s stalwart heroics and some nifty special effects. Director Wolfgang Petersen (Das Boot) keeps the action moving so fast you won’t be sweating the details. Don’t forget your parachute!

Harrison Ford, one of the quintessential actors of our time, was the perfect match as the battling President. When called upon, he fights back with the best of them. When push came to shove he shoved back real real hard. You can really believe him as the President of the U.S.A ready to risk it all to save his family.

Glenn Close is equally riviting as the female V.P. “You’re Commander in Chief has given you a direct order. Some of the reviewers criticize the movie for her role. She’s the Vice President. To do anything else would be a sure sign of weakness. As for the bullets being shot, you’ll notice that all of the bullets were shot at people. Also, it’s widely known that Air Force One is not your ordinary run of the mill 747’s that regular citizens ride. I wouldn’t be the least bit surprised to find that the entire shell is bullet proof, with bullet proof glass. Even bullets from machine guns can’t penetrate the armor of armored cars. Air Force One probably has the same material all around the main cabin. Do do any different would put the leader of the free world in serious jeopardy.

No matter how unbelievable some aspects of the film are, I still find ‘Air Force One’ a guilty pleasure that is enjoyable. The excellent acting from Harrison Ford, Glen Close, and Gary Oldman really make this film stand out.
Movie Content: 9/10

The print is presented in 1080p/AVC MPEG-4 with a 2.40:1 aspect ratio. Last time that I viewed this film was with the Superbit edition which was no slouch for a film on DVD. I found that colors offered some decent vibrancy throughout the presentation. Black levels are much deeper than the previous release on DVD. Fleshtones are natural with some lighter tones to the face. Details are excellent with up close scenes such as faces, clothing, and background objects to name a few things. Details hold up throughout the entire presentation. There are some hints of edge enhancement but not that noticeable.
Video Quality: 7/10

The audio is presented in Dolby TrueHD 5.1 mix. The TrueHD mix is quite an improvement in the soundfield and even more with the dialogue presentation. I was already impressed with the audio presentation from the Superbit DVD release, the new Dolby TrueHD mix takes it up a notch. Dialogue comes through loud and clear offering a well balanced mix. The surrounds are getting all kinds of engagement via effects like gunshots, fighting, and the soundtrack. This will impress anyone that is not sold on the format considering that this is a 12 year old film.
Audio Quality: 9/10

There is only one special feature on this disc and that is a Director’s Commentary, which is disappointing considering that previous releases had more than this. This is a very informative commentary, but the problem is that this lone feature can detract potential sales.

‘Air Force One’ is a film that gets panned by the critics time and time again. I find this film to be a guilty pleasure that I enjoy with every single viewing. For fans of this film and those that own the previous Superbit DVD, you will be glad to hear that this is an excellent upgrade providing excellent video and audio. I highly recommend ‘Air Force One’ to those that are new to the film and even those that have seen this film before.
Overall Rating: 8.5/10