Posted in DVD Reviews by George Theofanopoulos on 21 June 2010 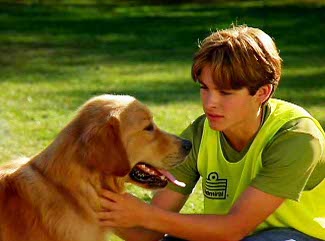 Three is a charm for the Air Bud franchise, which returns to the screen to showcase the athletic talents of Buddy, the golden retriever who made his film debut as a basketball star in the original Air Bud (1997). If the second movie, Air Bud: Golden Receiver (1998) wore out its welcome (with Buddy as a football dynamo), Disney’s third installment seems to have rekindled its initial freshness. Buddy takes to the soccer field this time, and he has the immense good fortune of being joined by real-life U.S. Women’s Soccer Team champions Brandi Chastain, Brianna Scurry, and Tisha Venturini, among others. Kevin Zegers returns to the story as Buddy’s owner, who falls in love with the only girl on his own soccer team. While sparks fly on and off the field in that romance, Buddy has a love interest of his own and soon becomes a father to six puppies. The drama heightens when a couple of puppy thieves (who closely resemble Jasper and Horace from 101 Dalmatians) pose as dog catchers and make off with the pups. A hilarious chase, assisted by dozens of courageous canines, ensues. Dog lovers in the audience will be pleased to know there is no insinuation of dog abuse here and there are no sad pet moments. Parents can skip this one, knowing their kids will enjoy plenty of benign entertainment while viewing some great soccer stunts by real-life champs. 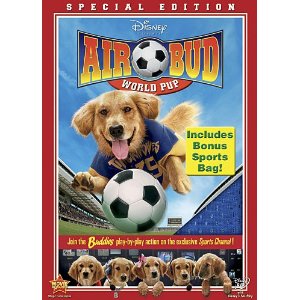 The original Air Bud dealt with a lot of serious issues. Josh had lost his dad, he moved to a new town and had no friends, he had to confront Buddy’s original owner, and he had to chose losing Buddy to protect Buddy. World Pup is so devoid of serious moments that one wonders at some of the characters.Both Buddy and Josh find love interests in this movie. Things start with Josh’s mother remarrying. Josh joins the soccer team in order to be closer to, and possibly make points with, a girl he is attracted to.

Two shady characters are out to get Buddy and Buddy’s love interest (and later, their puppies of which there are six and not four like pictured on the cover). There are plenty of good dog moments and the lack of seriousness means parents will not be tempted to skip over any scenes. But there are two things that don’t make sense.

Who are the bad guys, what are they really up to, and how can they make any money at it if it takes them many months just to get at Buddy and family?

As in Seventh Inning Stretch, Josh’s parents go to the big game and find out Josh is missing (as is his girlfriend and Buddy). What do they do? They watch the game! Can you believe it! They show no concern for a missing child (at least in SIS they have a few lines about wondering where they could be). The way the mother was portrayed in the first movie, she should have been turning the town upside-down looking for Josh. Not a good portrayal of a loving family.
Movie Content: 8/10