Posted in DVD Reviews by George Theofanopoulos on 02 March 2009 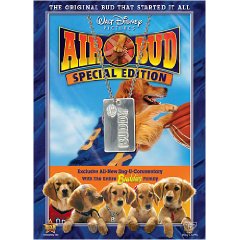 Buddy, the sensational real-life hoop hound with 22,000 career baskets under his collar, stars in this hilarious and touching Disney comedy critics cheered as “irresistible” family entertainment! When Josh Framm, a 12-year-old boy, finds himself in a new city with no friends, he’s too shy to try out for the basketball team. However, while practicing, he meets Buddy, a runaway golden retriever, who surprises him with his ability to score baskets. Josh and Buddy eventually make the school team, and the dog’s extraordinary talents spark a media frenzy — one that attracts Buddy’s greedy former owner (EVENING SHADE’S Michael Jeter), who wants to cash in on the dog’s notoriety. Boy and dog must keep one step ahead of the brute — while at the same time rallying their school team to the state finals! Get ready to be delighted, moved — and amazed — by AIR BUD, destined to become a timeless Disney favorite!

I don’t know why some people are mad about the fact that the dog can play basketball. So what if it’s unrealistic; do movies have to be realistic? I mean the heart of the movie has a believable touch. Even though the theme of “lonely boy befriends dog and becomes happy” has been used, it’s still a great movie. In some parts, you’ll laugh (like when Buddy’s original owner is chasing Josh and Buddy), yet some parts might make you cry (like when Josh is saying good-bye to Buddy). I found it to be a very touching tale, and I felt that the part where Josh is saying good-bye to Buddy was very touching and noble.

Josh is very lonely and sad as he moves to the town of Fernville. He finds an abandoned basketball court and goes there to practice (he used to play with his dad all the time, who died) when he sees a dirty golden retriever in rags whom was abandoned by a psycho clown who abused him. They play together, he sneaks him inside, and his mother finds out about Buddy and tries to get rid of him. The story goes on: eventually Josh gets to keep him and he learns that Buddy can play basketball- very well. When the clown finds out, he takes him away. I won’t spoil the ending for you, but trust me, it’s worth the money.

The other Air Bud films are also good, but this one is much deeper and touching than the others. To be honest, they get repetitive and predictable. This movie stands alone fine by itself, which makes it fun.
Movie Content: 4/5

‘Air Bud’ has started an empire of B movies in the franchise and the ‘Buddies’ franchise. See this movie, and you have seen all the air bud movies. But hey, it’s a golden retriever that can do just about any activity. These are fun and light hearted and worth it all.
Overall Rating: 3.5/5