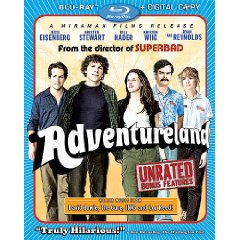 A sweet and slap-happy mix of indie coming-of-age drama and Judd Apatow’s scatological but heartfelt manchild comedies, Greg Mottola’s Adventureland is a winning look at the pleasures and frustrations of dead-end jobs and teenage kicks as viewed through a filter of mid-‘80s pop culture. The underutilized and always watchable Jesse Eisenberg (The Squid and the Whale) is a sheltered, introspective New York college grad who discovers that his parents’ financial woes will not only quash his dream of a summer in Europe (to enjoy its more “sexually permissive” nations) but require a move to Pittsburgh, where he lands a job at a dilapidated amusement park. There, he’s thrown in with a motley crew of eccentrics, small-town types and a few genuine free spirits, most notably co-worker Em (Kristen Stewart), whose complicated past proves irresistible to his repressed psyche. Mottola, who directed Superbad and episodes of the well-loved Freaks and Geeks, and who once worked in a similar park as a teen, doesn’t shy from the crude laughs that make Apatow’s features so popular, but he tempers it with a wistful tone and layered characters that hew closer to his earliest work, The Daytrippers. Though ill-matched at first, Eisenberg and Stewart make a likable on-screen couple, and they’re well-supported by a terrific cast that includes such die-hard scene-stealers as Bill Hader and Kristen Wiig as the park’s offbeat owners, Martin Starr as a Russian lit aficionado, and Ryan Reynolds as a former town tamer, now reduced to working as the park’s handyman. A soundtrack performed by underground faves Yo La Tengo and filled with a smart mix of hip cuts (Hüsker Dü, the New York Dolls, the Replacements) and period faves (Falco’s “Rock Me Amadeus”) underscores the film’s blend of tentative emotions and broad laughs.

Adventureland suffers from having an incredibly cliché plot, the standard awkward boy meets troubled girl fare that we’ve all seen hundreds of times before. From early on in the movie, I was able to figure out exactly where it was going, and at no point was I thrown for a loop. Everything proceeds according to genre conventions. There is nothing new or unexpected here. Additionally, there is a strange fatalistic tone that pervades the movie that manages to be overly serious and depressing without being at all deep.

None of the main characters are in any way likable or believable. A large portion of the plot revolves around the difficulty that Jesse Eisenberg’s character (James) has expressing his affection for Kristen Stewart’s character (Em) and attempting to make the relationship work. I guess this was supposed to be a meaningful story about two misunderstood college kids trying to reach out to each other and looking for love in all the wrong place. Instead, James comes off as a boring, awkward guy who becomes infatuated with the first girl who gives him any attention; Em never rises above our first impression of her as a cookie-cutter troubled teen who keeps James around for his good weed connection. Because of this, I couldn’t bring myself to care about what happened to either of them.

Too much of this movie seems to be an attempt by the forty-something director Greg Mottola to prove that he can still seem cool to today’s youth. The film is set in the 1980s, adding that retro feeling, or maybe just so people can namedrop Lou Reed every ten seconds. I am a child of the 80’s and this film just did not click with me at all.
Movie Quality: 5/10

The print is presented in 1080p/AVC MPEG-4 with a 1.85:1 aspect ratio. Colors were strong taking advantage of the color palette, yet providing a softer image in some areas. Blacks were not deep and soft. Fleshtones were not as detailed as I would have expected and more on the muddy side. Details are average throughout the film with some scenes looking really good. There is also a thin layer of grain which never gets distracting.
Video Quality: 7.5/10

The audio is presented in DTS-HD MA lossless 5.1 mix. I was also a tad bit disappointed with the audio mix as it lacked that extra needed oomph when the soundtrack was in play. The mix to be a little bit on the lower side than expected. I was rather surprised by the underwhelming audio mix.
Audio Quality: 8/10

The largest disappointment will come to those looking for nonstop laughs, of which this film spreads out – it relies on the humor of uncomfortable human situations more than glorified setups begging for contrived disasters. I was not a fan of this film and it felt like it dragged on from start to finish. I was disappointed by the audio and video of the film let alone the content. I would give this a rental first before purchasing.
Overall Rating: 7/10