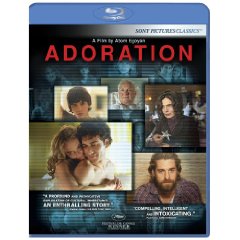 French high school teacher Sabine gives her class a translation exercise based on a real news story about a terrorist who plants a bomb in the airline luggage of his pregnant girlfriend, which would have killed her, her unborn child, and many others, but was discovered in time. In the course of translating, Simon, who lives with his uncle Tom, imagines that the news item is his own family’s story, where his Palestinian father Sami was the terrorist, the woman was his mother Rachel, an accomplished violinist, and he was her unborn child. Years ago, Sami crashed the family car, killing both himself and Rachel, making Simon an orphan. Influenced by his racist grandfather (we see Simon filming him with his mobile phone when he talks to him), Simon has always feared that the crash was not an accident but intentional. Simon reads his version to the class. Sabine asks him to develop the story as a drama exercise, and for dramatic effect pretend that it really happened. So he does, and discussions evolve on the Internet about the story. Sabine is fired for making Simon lie.

What would you do if you found out your father may have been a terrorist? A high school boy writes a story for class that makes this claim. Is it true? Friends, family, teachers and internet chat-room partners start to wonder and worry. Now he must journey through a maze of family secrets to find the truth about his dead father. From Academy Award-nominated director Atom Egoyan (1997, Best Director, The Sweet Hereafter) comes a story of a young man who must question everything he knows in order to learn who he is and who his father was. Adoration presents a world where there is no such thing as us versus them and the truth is never as simple as right and wrong.

The story—time-scrambled and sometimes zoning into the imagined, but ultimately clarified—revolves around computer-geek teen Simon (Devon Bostick), who carries a school assignment just a little too far. His high-school French teacher, Sabine (Arsinée Khanjian, the filmmaker’s wife and frequent collaborator), asks her class to translate a real news story about a Canadian-based terrorist who plants a bomb in the suitcase of his pregnant girlfriend headed for Israel. Simon is uniquely charged to also make the assignment a “drama exercise.”

The print is presented in 1080p/AVC MPEG-4 with a 1.78:1 aspect ratio. ‘Adoration’ is a film that is not going to have colors pop off the screen. The content of the film will not allow that and that is very understandable. There is a limited amount of colors that are used in this presentation which is not a bad thing. Fleshtones are natural in certain scenes but the one issue is that the film can be too bright at times giving an overblown contrast on faces. Then add details which aren’t impressive, but average. Again the film content here is meant to be rough.
Video Quality: 8.5/10

The audio is presented in DTS-HD MA lossless 5.1 mix. I think that this might be the first Sony title to have DTS-HD MA lossless audio. I am surprised by this decision as the sound design in ‘Adoration’ does not take advantage of DTS-HD since this is not a film which is bombastic sounding. This is more of a front heavy experience with discrete amounts of effects coming from the rears.
Audio Quality: 8.5/10

‘Adoration’ is a surprising film that is very well written and acted as it really grabs the viewer. This is one of the better films that I have seen here in 2009 and would highly recommend it. Sony does another excellent job with this release on Blu-ray providing sufficient video and audio to take advantage of the film’s content.
Overall Rating: 8/10