According to Jim The Complete Fourth Season DVD Review

Posted in DVD Reviews by George Theofanopoulos on 25 July 2011 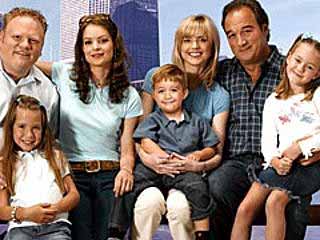 The fourth season of ABC’s breakout family series “According to Jim” starts off with a bang as Jim (Jim Belushi) must give up his vices so his wife Cheryl (Courtney Thorne-Smith) can get pregnant. In this traditional blue-collar family comedy, he is the quintessential guy and family man. Proud of his Midwestern values, Jim is an accessible and likeable everyman. He and Cheryl are crazy about each other and know they’re in this marriage for keeps. Cheryl, gorgeous and smart, calls Jim on his childish antics but enjoys the playful banter and appreciates his passion, honesty and steadfast loyalty to her and the kids. 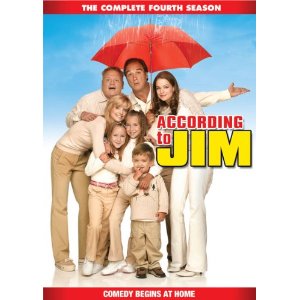 Nothing makes me laugh like Belushi’s show. Some reviewers criticize him unfairly, I think. Some think he’s sexist–it’s a comedy show, not a documentary. Some comment about his weight–just look at your neighbor, or yourself. America is fat. It’s a comedy show! Get over it.

This cast works so well together it just seems natural. Belushi is, obviously, an American Everyman and plays up some obvious cliches . . . but so what. We laugh at the ridiculous and there’s plenty of that to go around. According To Jim is fresh and surprising, sometimes low-brow, but always funny. Another great season here. I cannot believe how real Jim Belushi seems on screen, he must be very much like this character in real life. In this world of seriously sad situations, we all need a bit of this humor in our daily lives. Here it is, and no commercials, of course!

One of the best family sitcoms that I have ever watched. While the show tapered off towards the end due to issues with scheduling for both our main actress and the show on network television this is one of the best seasons.
Overall Rating: 6/10