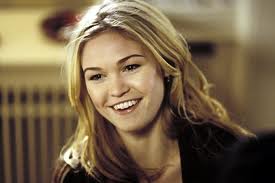 A Guy Thing wants so desperately to be a funny thing that it turns into almost nothing at all. This movie is like an annoying party guest who won’t go home, although the most loyal devotees of Julia Stiles and Jason Lee are sure to get a few good laughs. Lee’s awkwardly cast (and costumed) as a husband-to-be who’s about to discover he’s fallen in love with the free-spirited cousin (Stiles) of his comparatively straight-laced fiancée (Selma Blair). When all the who’s-who gets figured out, this decidedly unromantic comedy shifts into auto-pilot with Lee trapped in a rote series of compromising positions. Every outcome is telegraphed far in advance, and true love takes its course with numbing efficiency. Lee barely squeaks by with his dignity intact; the fact that Stiles emerges buoyantly unscathed is further proof that this beguiling actress is deservedly a star on the rise. 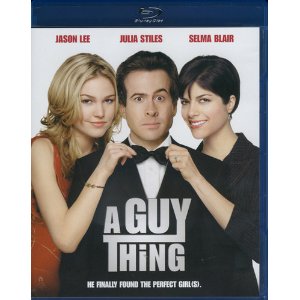 “A Guy Thing” is more of a formula than a story. It increases more on the rules of romantic comedy, and it decreases on originality. It stars Jason Lee, Julia Stiles, and Selma Blair. None of the actors I had a problem with, but the storyline could have had alot of work done to it. The movie could have been much better if it ignored the standard features of a romantic comedy. If this movie dared to be original, it would have been so much better. The movie did have some funny moments, and good characters, but I have seen this kind of movie before, and I want to see it done better. The movie could be described by the movie’s tagline.

“Boy Meets Girl, Boy Meets Girl’s Cousin.” It’s pretty obvious what the movie is about, and how the movie is going to end. The movie is about Paul. Paul is an ad salesmen who is getting ready to be married in one week to Karen. He works for her father, Ken, and he is ready for his bachlor party which is being thrown by his brother Pete, and his friend Jim. The entertainment for the party are hula girls, and among them is Becky. Paul gives his groom hat to Jim, and the next mourning he finds himself in bed with Becky, because she doesn’t know that he is the groom to be. Paul doesn’t remember what happened between the two, rushes Becky out, and then finds Karen coming in seconds later. This begins a seris of lies that start by Jim telling him never to tell Karen what happened between him and Becky.

The problem really starts at a dinner party with Paul’s parents, Karen’s parents, her Aunt Budge, and Karen’s cousin who happens to be Becky. Paul has to have Becky assure him that she will never tell anybody anything about what may or may not have happened between them, but the situations gets complicated when Becky’s crazy cop ex-boyfriend and gets jealous of him. As Paul’s wedding day comes closer and closer, he tries to cover up everything that he lied about, so that this whole thing could end.
Movie Quality: 8/10

The print is presented in 1080p/AVC MPEG-4 with a 1:85:1 aspect ratio. As part of the catalog titles being released on Blu-ray by Twentieth Century Fox and MGM, picture quality for “A Guy Thing” tends to look good most of the time. There is a good amount of grain, black levels are nice and deep and skin tones are natural. But I did detect white speckles showing up from time-to-time and also banding and possibly low-artifacting during scenes with certain lighting. Granted, by no means is this going to affect anyone’s viewing of the film.
Print Quality: 8/10

The audio is presented in a DTS-HD Master Audio 5.1 mix. Typically for romantic comedies, they are dialogue and music driven but because this film has crowd scenes, even various action-related scenes, the surround channel is used quite a bit. So, there is good use of the ambiance through the surround channels more than most romantic comedies that I have come across on Blu-ray.
Print Quality: 8/10

Surprisingly fun romantic comedy. Not a lot of “fall out of your chair” comedy here, but it’s consistent and fun. The soundtrack is awesome, rather than go to big names for music, they use “bar band” music to create the moods for the movie, it surprisingly works well, and adds to the goofy awkward feeling of the movie.
Overall Rating: 7/10