Brighter and more colorful than the other animated insect movie of 1998 (Antz), A Bug’s Life is the sweetly told story of Flik (voiced by David Foley), an ant searching for better ways to be a bug. His colony unfortunately revolves around feeding and fearing the local grasshoppers (lead by Hopper, voiced with gleeful menace by Kevin Spacey). When Flik accidentally destroys the seasonal food supply for the grasshoppers he decides to look for help (“We need bigger bugs!”). The ants, led by Princess Atta (Julia Louis-Dreyfus), are eager to dispose of the troublesome Flik. Yet he finds help–a hearty bunch of bug warriors–and brings them back to the colony. Unfortunately they are just traveling performers afraid of conflict.

As with Toy Story, the ensemble of creatures and voices is remarkable and often inspired. Highlights include wiseacre comedian Denis Leary as an un-ladylike ladybug, Joe Ranft as the German-accented caterpillar, David Hyde Pierce as a stick bug, and Michael McShane as a pair of unintelligible pillbugs. The scene-stealer is Atta’s squeaky-voiced sister, baby Dot (Hayden Panettiere), who has a big sweet spot for Flik. 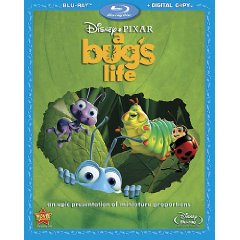 This film has great moments, like when the ants can’t figure out how to get around a leaf that has fallen in front of them(although I didn’t quite get that, since I would think the ants could see over the leaf, but I guess I was putting too much thought into it.) As many great visual moments as the film has, I just couldn’t help feel that it’s trapped by the Disney formula of one unlikely hero rising above “it all” to save the day. That’s definitely nothing new to filmmaking, but there’s a certain Disney plot line that makes everything that’s about to happen fairly obvious to an adult before they set foot in the theater.

Again, the animation is wonderful and, to be honest, although it’s more safe feeling than ‘Antz’, ‘A Bug’s Life’ does do a better job at providing the scope of this miniature world, from the leaves and grass to the stones and ant tunnels. The only thing I didn’t quite care for was the way the ants are animated here. There were a lot of comparisons made between ‘Antz’ and ‘A Bug’s Life’.

As for messages and morals, A Bug’s Life has plenty, but thankfully none of them are as in-your-face as other similar movies. The most obvious theme is believing in yourself, which surprisingly perhaps, doesn’t come over as corny in the slightest, but works well in not only focusing on Flick but also the Princess Atta, who feels the burden of responsibility on her shoulders along with self-doubt. There are also more than passing resemblances in the grasshopper’s rule to an absolutist regime, something that is superbly realised in the finale with some really very stunning animation showing the bleak landscapes of Ant Island as well as being representative of the dreary situation in general. Whilst erring on the side of funny the majority of the time, Bug’s Life does well to be a pretty moving and genuine feature that should please everyone in the whole family.
Movie Content: 9.5/10

The print is presented in 1080p/AVC MPEG-4 with a 2.35:1 aspect ratio. ‘A Bug’s Life’ is a really colorful movie and the characters are really smooth looking. The image is image is unbelievably clear and super sharp. The colors pop off of the screen for even an older animation, it brings out the details in the animation. Some good examples of fine details, look at the foilage, you can see the lush environments. Animations have been looking so wonderful on Blu-ray and this film is no exception.
Print Quality: 9/10

The audio is presented in DTS-HD MA lossless 5.1 mix. he sound is rather impressive in ‘A Bug’s Life’ and this I wasn’t even expecting going in. It takes advantage of the soundfield with the rears actually getting a good workout with the soundtrack and effects. The sound from the fight scenes is also well done. Dialogue is well placed through the center channel with voices being so ever clear.
Audio Quality: 9/10

I find ‘A Bug’s Life’ very amusing and fun. Its CGI are amazing and its characters are charming. It presents the ant’s colony in a different, enjoyable point of view. It’s thrilling and will keep all the family entertained. In its clever way, the movie visualizes a world that can not be seen with special effects. On Blu-ray the film is an audio and video treat for those that are fans of high definition. I highly recommend this film as its one for the whole family.
Overall Rating: 9/10