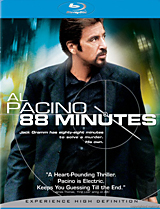 ‘88 Minutes’ is one of those films that you will either love or hate and I just don’t see an in-between on this one. Over the last 10 years, Al Pacino has played in some lackluster roles and it is his fault for choosing to play those parts. At 67 years old, Pacino still looks good for his age and should still be in powerful roles like he has been in the past and not movies that drag his reputation through the mud. Personally, I enjoyed ‘88 Minutes’ much more than I originally thought I was going to. I am a big fan of Al Pacino’s and he has had some stinkers over the last few years like ‘Two for the Money’, ‘People I Know’, ‘The Recruit’ (which I liked), and ‘Simone’ to name a few movies.

‘88 Minutes’ is a thriller that runs into way too many directions for its own good. With thrillers I find it important to keep your viewer base guessing till the end, but at one point in the movie a vital hint is dropped that gives away who the murderer is behind all this. I didn’t catch on right away, but it made me think this person was involved after a few other key scenes afterwards. Those that pick up rather quickly on who is behind the crime in thrillers might nab this one right away. Jack Gramm (Al Pacino) is a college professor and part-time FBI forensic psychiatry expert. Jack Gramm is a highly regarded professor on the campus that has his life turned upside down in a matter of minutes. The movie opens up with a murder that occurs, but we never see the killers face. But there is a witness that sees who the killer is that murdered her twin sister. The killer turns out to be Jon Forester whom we meet in court as Jack Gramm is giving his expert testimony on how Forester committed the crime
based off of the evidence.

On the eve of Forester’s execution, murders start popping up in Seattle and it ends up being one of Gramm’s students. As Gramm is trying to piece all this together and figure out whom is commiting these murders, his cell phone rings and the clock turns on Gramm as he races against 88 minutes to solve his own murder. With these murders occurring while Forester is in prison, did Gramm help put away the wrong man? I will leave that for you to determine while watching this film.

’88 Minutes’ is one of those films where you have to leave reality at the door. There were many times where Pacino was at the right place at the right time, which probably wouldn’t have occurred if we were in the same situation. There was one scene that left me baffled, since I have never heard of this or even seen it in person with a prisoner that is about to meet his execution. Since this is Hollywood, they can make their own rules for the movie to work.

The picture quality of ’88 Minutes’ isn’t one of the best Blu-ray films that I have seen. The image wasn’t that great looking as I thought it would be having seen this film in the theaters when it first released. The image is way too bright for its own good on this transfer. The sound quality is presented in Dolby TrueHD 5.1 mix and this is an even more mixed bag than the picture transfer. The soundfield is ok, but not anything to brag home about that this is a demo disc. The dialogue mix was done well and everything sounds very crisp and clear.

’88 Minutes’ is a popcorn thriller that will find its audience and have people which will enjoy this for what it is. Al Pacino pulls out another great performance and boy did he run a lot in this film at the age of 67. I doubt that was even a stunt double since his movements and look were exactly and down to the tee Pacino. I recommend this film as a rental but not a purchase.

« The Great Movies, vol. 3: Boogie Nights
‘When We Left Earth – The Nasa Missions’ on DVD and Blu-ray September 30th »