Posted in DVD Reviews by George Theofanopoulos on 26 September 2009 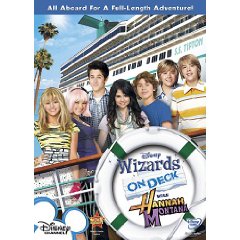 Climb on board for fun on the high seas as three of your favorite Disney Channel shows come together in WIZARDS ON DECK WITH HANNAH MONTANA — on DVD for the first time ever! The S.S. TIPTON embarks on a triple-length comedy crossover event when Justin wins a Teen Cruise to Hawaii — and a chance to meet London. Both Justin and Max do their best to win the heiress’s affection, while Cody tries to win concert tickets for Bailey, and Alex accuses Zack of being a prankster. Between the kids’ pranks (who turned Justin blue?!) and crazy schemes (Alex sneaks Harper on board to take her make-up science class?!), the excitement goes overboard when international superstar Hannah Montana checks in on her way to a sold-out concert in Hawaii. But when Miley Stewart loses her lucky charm anklet and her Hannah wig, are her days as the world’s biggest pop star over forever? It’s all here in WIZARDS ON DECK WITH HANNAH MONTANA with three times the fun and triple the laughs! Plus, this new full-length adventure includes exclusive behind-the-scenes footage, hilarious cast bloopers and more!

Part 1: Cast-Away (To Another Show)
Parts 1 & 2 are my favorite of the crossover specials. Suite Life and Wizards of Waverly Place are my favorite shows on Disney as of now. This is the Wizards part of the crossover, Justin wins a contest on a free Teen cruise shop to Hawaii on the S.S.Tipton and gets to meet London Tipton (Brenda Song, another crush of mine). Alex, Max & Harper go onboard as well cause some crazy antics with the Suite Life cast. This episode was a strong start and the humor in this episode is actually pretty hilarious.

Part 2: Double Crossed
This would be considered the Suite Life part of the show, but you won’t be able to tell the difference since the characters from part 2 are basically the same from part 1. This episode introduces Hannah Montana to the party of stars and emphasizes the relationship between Cody and Bailey (Debby Ryan, haha another cutie) and fans of their relationship will LOVE this episode. The chemistry between Selena Gomez and Dylan Sprouse in this episode is actually pretty funny, Zack tries to impress Alex and Alex strays away, classic stalker-like humor. Just a note, this is the only episode that features ALL of the shows stars in ONE episode, pretty cool.

Part 3: Super(sticious) Girl
This is the Hannah Montana arc and my least favorite arc of the trilogy. This part features none of the Wizards cast and I think that was the problem, but theres more. The Hannah Montana arc is not very funny at all, I guess the writers were getting tired from the previous 2 parts and just made up this part of the story last minute or sumthin. Again, Hannah Montana is starting to get really old, the humor was pretty stail and the characters from the Suite Life and Hannah Montana barely collided with one another and that was the problem. For a crossover to be successful, the characters from each show are supposed to interact with each other most of the time, and since they didn’t, it just felt like another Hannah Montana episode that randomly features the cast from Suite Life on Deck. The only thing that saves this part of the special is the elavated relationship between Bailey and Cody. But other than that, it was terrible, just skip this part.
Movie Quality: 9/10

These three episodes mixes up the The Russo family, Zack, Cody, Hannah Montana, London Tipton, Lilly, Mr. Moseby, and Robby Ray!. If you are a fan of all three shows, this will be a treat.
Overall Rating: 9/10