One was the Yankees’ best loved player, the other was their most valuable. In the summer of 1961, Roger Maris and Mickey Mantle took on Babe Ruth’s record, the 1927 single-season 60 home run slam. It would be a summer that no one who knows baseball would forget. In 1961, Mickey Mantle is a Yankee favorite. The smiling sun god of the season, a hit with fans and sports writers alike and natural heir to his predecessors Joe DiMaggio, Lou Gehrig, and Bebe Ruth. Also at bat is a yound midwesterner, Roger Maris. A hard-hitting right fielder, Maris is Mantle’s opposite in almost every way. Quiet and soft-spoken, he doesn’t add up to everything a sports legend should be, and finds himself losing the support of the fans when he refuses to try. As the summer of 1961 unfolds, both Maris and Mantle find themselves approaching Babe Ruth’s benchmark of 60 home runs. Facing mounting pressure from the media and the stands, they both know there’s only room for one winner. The people make their choice known. But the people’s favorite isn’t the favorite to win. 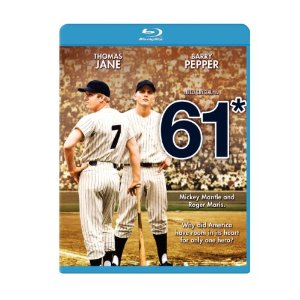 Most films that try to capture the significance of a sporting event from a by-gone era suffer because they fail to attach it to any historical context. Upon first view, I thought that “61*” was somewhat guilty of that. It was an unfair opinion because at that time I had just finished watching “Seabiscuit” and “Miracle”, both of which are slightly superior films. Now, however, I’ve had a change of mind after a second viewing. Billy Crystal has done an enormous job in capturing the M&M boys of 1961.

Crystal has all the bases covered (bad pun intended). He covers Maris’ can-do spirit as he approaches the Babe’s single-season home run mark. However, Crystal also covers the hostility this drew from the press and the fans. Barry Pepper does a great job conveying Maris’ quiet suffering that the anger spawned. Meanwhile, Maris’ friend, the beloved Mickey Mantle is also nearing Ruth’s record, but doesn’t generate such animosity. Off the field, however, Crystal shows us Mantle making that changeover from a fun-loving young man to an almost self-destructing adult. Around these two men, the press–specifically the voracious New York press–circles like vultures.

The side characters are fairly well-rounded and well-portrayed: specifically, Anthony Michael Hall as Whitey Ford.

Crystal’s fondness for the era is evident in every scene. Fortunately, he doesn’t wax too nostalgic. Instead, he gives us an honest view of a time when baseball was barely clinging to its innocence, and of a man who did not deserve the hostility and the asterisk that haunted him.
Movie Quality: 9.5/10

The print is presented in 1080p/AVC MPEG-4 with a 2:40:1 aspect ratio. This summer classic on Blu-ray looks phenomenal and very close to being picture perfect. Colors are very strong and  colorful throughout the entire presentation. The lighting was excellent in many scenes which ended up looking great on the field. Black levels are deep and inky. Flesh tones are accurate. Details are the best that I have seen in a high definition presentation.
Print Quality: 9.5/10

The audio is presented in a DTS-HD MA l0ssless 5.1 mix. If there is one redeeming element for this disc, it has to do with the audio presentation. From the dialogue pieces and the effects in the soundfield, the audio is top notch. This is one very nice mix during the on field audio providing a nice dynamic range and excellent panning. The sound makes you feel as if you are a part of the ball game and sitting right in the middle of the field. Dialogue was clean and clear through the center channel. I found this mix to be well balanced with no point during the film did I have to use my remote to adjust the volume.
Print Quality: 9.5/10

Upon its release, 61* immediately became a classic. The baseball scenes are the best of any movie ever. You never feel like you’re watching actors. But the key to the movie is its realism. Thomas Jane and Barry Pepper are extraordinary as Mantle and Maris, respectively. If you are a baseball fan and Yankees fan, you will love this film.
Overall Rating: 8.5/10

« Transformers The Beast Wars Complete Season One DVD Review
When It Was A Game: Complete Collection Blu-ray Review »