Posted in DVD Reviews by George Theofanopoulos on 13 February 2009 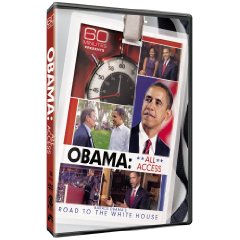 If you are a fan of President Barack Obama, this DVD is a very good opportunity to get up close and personal with the 44th President. From his beginning as a Senator from Illinois to his road to the White House and to the monumental day of his inauguration, only one show and one correspondent was granted exclusive access to the Senator and that was “60 Minutes” and correspondent Steve Kroft.

’60 Minutes Presents Obama: All Access – Barack Obama’s Road To The White House’ is a wonderful glimpse into the personal and professional life of Barack Obama, his wife Michelle and their two daughters. The 44th President (November 16, 2008) – This 38-minute post-election interview with President Obama goes into the economy, automobile industry, bail-out, his Washington apartment and getting a family dog and his mother-in-law. Also, interesting insight from President Obama in regards to having an NCAA Football playoff system.

The Road to the White House (December 28, 2008) – This 34-minute interview features President Barack Obama’s road to the White House. Exclusive footage given to “60 Minutes” of Obama’s two year audition to the American people and clips from past interviews with then Senator Obama and his wife Michelle.

What You Haven’t Seen – Steve Kroft explains that there were so much footage that did not make it on the air and thus with the DVD, they included 14-minutes of footage. This footage is much more personal as President Obama talks about his upbringing, his mother, Abraham Lincoln and the relationship between Barack and his wife Michelle.

I found “60 Minutes Presents Obama: All Access – Barack Obama’s Road To The White House” to be a fantastic collection of exclusive footage of Barack Obama. It’s one thing to see the political side of the President but you really had good insight to both the President and the first lady. How they want to live normal lives and especially how important they are as parents to their two young daughters.
Overall Rating: 4.5/5

3 separate links for each clip to watch/download.