Posted in DVD Reviews by George Theofanopoulos on 14 January 2009

The ‘Resident Evil’ franchise has really exploded in the entertainment world since its debut in videogames on March 1996. Resident Evil first made its debut on the Sony Playstation and was the sole reason why I jumped to the gaming platform. The original game had all twists and turns in a small town that was slowly being over run by a zombie infection. We are introduced to the corporation behind this mess called Umbrella with their T-Virus that began to spread across the boundaries of Raccoon City and into the world. Through videogames, movies, and comic books the ‘Resident Evil’ universe would continue to be expanded upon.

Capcom and Sony Pictures would team together once again for another feature film adventure, except this time is an animated adventure. There are a few differences to the story and also the return of a few characters from the game world. ‘Resident Evil: Degeneration’ is born adding more story to the ‘Resident Evil’ mythology.

The story begins with an Umbrella like corporation named WilPharma as they are conducting experiments on humans. They are also working with Senator Ron Davis (Michael Sorich)   Claire Redfield (Alyson Court) works for a group called Terra-Save that helps victims of biological abuse. Claire is on the way to the airport to meet with her friend Ms. Chalwa and her niece Rani (Michelle Ruff). There is an incoming plane to the airport that crashes due to an infected passenger causing chaos on the plane. The zombie outbreak occurs at the airport as the same Senator working with WilPharma is running out of the airport to get out of the hell that is about to unleash.

A team which is led by Leon S. Kennedy (Paul Mercier) is sent in to make sure that Senator Davis makes it out alive. Somehow the T-Virus has been unleashed again into the world and nobody is sure as to who is the culprit behind the out break this time around. Both Claire and Leon team up to stop this latest outbreak.

I really enjoyed this latest entry in the ‘Resident Evil’ feature film mythos as the story was engaging from start to finish. The use of the Senator’s involvement and how corporations can be corrupt is a big part of this story. This almost feels like a page torn out of one of Romero’s ‘Dead’ films. Then add the return of Leon and Claire from the videogame universe, and you have a very enjoyable film.
Movie Content: 4/5 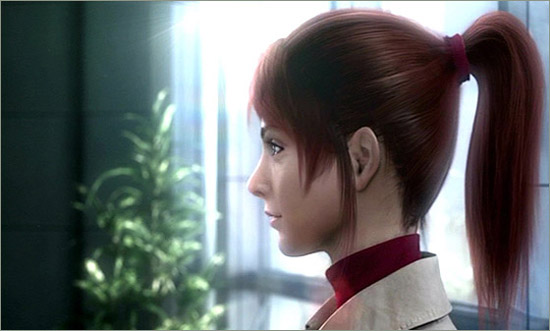 The print is presented in anamorphic widescreen 1.78:1 aspect ratio. For CGI animation, this film looks very good and is on par with some of the Pixar and DreamWorks animation. Colors are bright throughout providing an outstanding visual experience. Blacks are strong, but a little bit on the lighter side in several scenes. Details are pretty good for a DVD, but I still want to see how good this film looks on Blu-ray with no compression. There were some artifacts that I noticed in this version of the film.
Video Quality: 4/5

The audio is presented in Dolby Digital 5.1 mix. I found the audio to not be as aggressive as expected, so that is a little bit disappointing for a film like this which could excel using the soundfield to its advantage. The rears weren’t as active as I would have thought. Dialogue is clear through the center channel with no apparent issues.
Audio Quality: 3.5/5

I found ‘Resident Evil: Degeneration’ to be a nice entry into the ‘Resident Evil’ universe as it helped expand the overall story. Time will tell if Capcom and Sony Pictures make another animated feature film or go back to the live action route. If you are a fan of ‘Resident Evil’, I highly recommend checking out this latest entry as the new ‘Resident Evil 5’ is coming in March.
Overall Rating: 4/5 (Purchase)