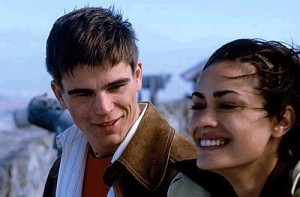 After being brutally dumped by his knockout ex-girlfriend, Matt (Josh Hartnett, Pearl Harbor) is so torn up inside that he vows to give up sexual activity–including masturbation–for Lent. His friends and coworkers start betting on how soon he’ll crack. Their skepticism is given fuel when Matt meets Erica (Shannyn Sossamon, A Knight’s Tale) at a laundromat. They’re immediately smitten with each other, but Matt struggles to stay true to his vow, even though it threatens to founder his potential relationship with Erica. Based on this description, you might think that 40 Days and 40 Nights is religious educational video–however, the barrage of sex gags and frequent nudity would quickly dispel this notion. Almost nothing in this movie remotely resembles human behavior. Some movies are so deeply stupid that they’re depressing to watch; this is one of them. 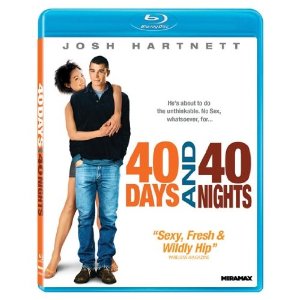 Josh Hartnett plays the male lead Matt, in this “movie”. Hartnett’s other roles are quite variegated and some of his greatest roles are in Lucky Number Slevin, Sin City, Black Hawk Down and The Virgin Suicides. The female lead in this movie is Erica, played by Shannyn Sossaman, most noted for “A Knight’s Tale”, but has also been seen in One Missed Call and Rules of Attraction. Josh Hartnett’s character makes a para-religious vow to abstain for 40 days and 40 nights from all sexual activity to get his ex-girlfriend Nicole out of his system. He, of course, meets Erica in the middle of his vow and has real trouble keeping his vow as they fall for each other.

There is little good to be said about this movie. It does have a few larfs, it has a couple of jerky, gratuitous shots of naked breasts. Its soundtrack is modern and kinda catchy. Overall, how this got a R rating, I’ll never know. This is strictly PG13 fare.
Movie Quality: 4/10

The print is presented in 1080p/AVC MPEG-4 with a 1:85:1 aspect ratio. This film is uneven throughout on Blu-ray. There are scenes where the picture looks very clean and pristine with tiny hints of grain to times where there is much more grain to the print. The image is rather soft at some points of the film, but this is the best that this film has ever looked when compared to DVD.
Print Quality: 4/10

The audio is presented in a DTS-HD MA l0ssless 5.1 mix. The audio presentation mix which is really good for a dialogue heavy film. My rear speakers were working fairly well during the film’s soundtrack, but the center channel is going to get the most use with the dialogue driven parts of the film.
Print Quality: 8/10

As a film experience, its a lightweight – no character is more than mildly compelling and ultimately it never breaks through the surface of funny or interesting – which is disappointing because the setting was both in spades. I was left rather disappointed with the video quality of the film and it doesn’t help with the lack of extras.
Overall Rating: 5/10