3 Days of The Condor Blu-ray Review

Robert Redford and Sydney Pollack continued their longtime collaboration (the actor and director have worked together on Jeremiah Johnson, The Way We Were, The Electric Horseman, and Out of Africa, among other films) with this taut spy drama. Redford plays a reader for U.S. intelligence who becomes a hunted man after he is not among the victims of a mass murder of his colleagues. Faye Dunaway does solid work as the frightened and mystified woman whom he forces to conceal him, and Max von Sydow is appropriately cool as a professional assassin. That same, sustained tone of danger and expectation that made Pollack’s The Firm so much fun can be found in this 1975 thriller, albeit with an appropriate dose of post-Watergate paranoia. 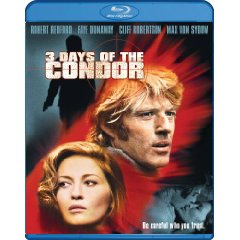 This is also a great New York City film. Its streets, back alleys, and buildings — in particular, the World Trade Center — all play supporting roles. Sidney Pollack makes good use of the then-newly finished twin towers in “Condor,” and this viewer lamented their destruction after watching scenes featuring the main lobby and a top-floor office inhabited by CIA deputy director Cliff Robertson.

The grainy quality of the film, matched with an often funky, sometimes melancholy soundtrack scored by Dave Grusin, also adds to the aura of ‘Condor.’ It’s as if Pollack attempted to do an American sendup of a French intrigue film. Grusin’s music also is not what you’d expect in a spy film, in that it has not a hint of the James Bond sound. Then again, the film is not a romantic spy thriller, so it works.

In fact, Pollack and Redford successfuly convey a post-Watergate paranoia that the citizens’ government is ‘out there’ and will stop at nothing to hunt down the truth-seeking rogue. Phone taps and plumbers (disguised, this time, as mailmen) abound. Suitably, ‘Three Days of the Condor’ ends with a very anti-establishment message.
Movie Content: 9/10

The print is presented in 1080p/AVC MPEG-4 with a 2.40:1 aspect ratio. Colors are vibrant and vivid, providing for a bright colored image. Flesh tones are accurate. Blacks are deep, yet there are a few instances where they look a bit soft. Details are prevalent throughout the entire print. I was very impressed with the image considering that the film is over 30 years old.
Print Quality: 9/10

The audio is presented in Dolby TrueHD 5.1 mix. With this film being dialogue centric do not expect your soundfield to be booming throughout the entire film. The rears barely get any sound through them unless there are some effects or the score from the soundtrack. Dialogue comes through the center channel very clear and crisp.
Audio Quality: 8/10

‘3 Days of the Condor’ is a great film that still holds up rather well in 2009. On Blu-ray the film is surprising with excellent video quality.
Overall Rating: 9/10

« The Best of Star Trek: The Next Generation
Two and a Half Men: The Complete Fifth Season »