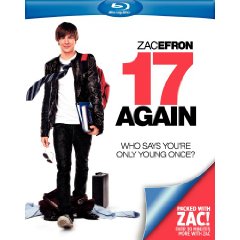 Zac Efron breaks free of his High School Musical legacy with 17 Again, leading a pack of fine comic actors in a body-switching comedy that freshens the genre with good ideas. Efron plays Mike, a high-school basketball star who blows a college scholarship in 1989 to marry his sweetheart. Cut to 2009, and late-30s Mike (Matthew Perry) is a sour guy passed over for a promotion and feeling estranged from that wife, Scarlett (Leslie Mann), and teen kids (Michelle Trachtenberg, Sterling Knight). Magical intervention causes Mike to turn 17 once more–albeit in the present–and tackle his failures with a fresh start. As the hot new kid in his children’s high school, Mike proves a better father to them as their peer than as a man, while Scarlett sees in him everything that attracted her to her husband two decades before. Writer Jason Filardi and director Burr Steers demonstrate an imaginative and supple wit in such half-expected scenes as Mike’s confrontations with a school bully and his unsuspecting daughter’s flirtations with him. But it’s Efron who carries some truly delicate moments and proves to be genuinely sympathetic when emotions get thick and heavy. Thomas Lennon is also entertaining as a wealthy Star Wars nerd who pretends to be Mike’s father, but his slightly excessive screen time suggests the filmmakers weren’t entirely sure Efron could do what needed to be done. If so, they were mistaken.

Mike O’Donnell is the star basketball player in 1989. He has a big chance of receiving a major scholarship–this all changes the night of the game. Twenty years later, Mike is living with his best friend Ned. His wife has filed for divorce. Mike goes to pick his children up from school and runs into a strange (mostly unexplained) janitor who asks him if he would like to be seventeen all over again.

Later that night, Mike falls into a watery vortex and is seventeen again, but he is not reliving his senior year in 1989…but right now in 2009. The movie is a little hard to follow at times, and the ending is rushed–and some viewers will question how this resolution was reached based on a few scenes. Zac Efron proves that he is more than “High School Musical” material. The young actor delivers his lines in a way that makes you believe that he is both 17 and 37.

The print is presented in 1080p/AVC MPEG-4 with a 2.40:1 aspect ratio. I found this print to be rather eye pleasing with vibrant colors. Fleshtones are very natural and accurate, considering that we see a few bare necessities throughout. Black levels are solid throughout. The image was also sharp with excellent details. The image is clean and pristine making this a very nice looking image.
Video Quality: 9/10

The audio is presented in Dolby Digital 5.1 mix. This film is a dialogue driven film. Dialogue was clean through the center channel with a nice degree of depth. I never had to raise or lower the volume to make out what was being said. The soundfield does get a few effects into play, but nothing major. The soundtrack takes advantage of the soundfield with audio also pouring through the rears.
Audio Quality: 9/10

’17 Again’ could have been far better if the writers had bothered to script a better plot. Lack of back story on the characters made it hard to really understand the wife’s rage, or the children’s complete dismissal of the father. On Blu-ray the film looks and sounds good.
Overall Rating: 8/10