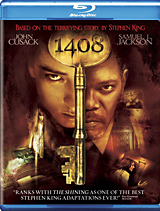 Stephen King’s novel and short story adaptations in 2007 made their return to the silver screen. In the 80’s and 90’s a lot of King’s work either received a theatrical release or a made for TV mini-series. ‘1408’ is based off of another one of King’s short stories. ‘1408’ actually turned out to be a sleeper hit at the box office and even bigger hit when it hit the DVD market. This was one of the films that HD DVD fans were hoping would have made it on the format since Weinstein was HD DVD exclusive at the time, but it never did here in the United States, only overseas. Here we are in 2008 with its debut on Blu-ray better late than never.

The story begins with Mike Enslin (John Cusak), whom is a writer that has made a living off of writing books about ghosts and haunted places. Mike will do something that he will long regret. He decides to visit the Dolphin Hotel and meets the hotel manager Gerald Olin (Samuel L. Jackson). Mike is hell bent on staying in room 1408, but Olin continues to tell him not too stay in there as it is a haunted room. What happens over the next few hours is very creepy and the room starts to play with Mike’s head. Mike really starts to lose it as the paranormal are digging into his head brining out the worst thoughts and memories of his past involving his wife, daughter, and father. This short story of King’s works very well for both the writing team and Cusak because he took this character as his own and makes this his best performance since ‘Identity’. The writing team decided that they would follow King’s story to the tee, but would also infuse some of their own ideas.

‘1408’ was a bit of a spooky film to me, but others didn’t find it in the same vein. Even though the film is PG-13, there are elements here that will freak you out. The tension builds at the beginning of the film as Mike is going to go into room 1408. After that the tension dies down a bit, but it builds up again later in the film. This tension makes you feel for Mike as he is trying to get himself out of the enclosed room ‘1408’. Films like this either work very well or fall flat due to really being one dimensional, but ‘1408’ works so well on so many levels. It helps a lot that the writing team did a lot to go with character development the first 15-20 minutes of the film. This is also the ‘Director’s Cut’ of ‘1408’, so we get 112 minutes and tons of extra footage vs. the theatrical cut. I believe that the ‘Director’s Cut’ is the better version of the film as it expands on Mike’s background a bit more, which helps the film.

The picture quality of ‘1408’ is a better print quality than the DVD and presented in 2:35:1 1080p transfer. The detailed transfer is a little bit soft in some areas but deep in others and a lot of that has to do with the film being mainly shot in a hotel room where there is only so much that you could really do to begin with. The yellow hues seem to be a dominant color used in this print. The audio is presented in Dolby TrueHD 5.1 and Dolby Digital 5.1 mixes. It is nice to see that Genius/Weinstein offer two different audio options for those that may want one over the other. The soundfield is utterly amazing in this film as the rears take full blown advantage of the chaos/disaster taking place in the room 1408. Any sound that you can think of in ‘1408’ comes through so vibrant and loud that there were a few times I thought my house was going to blow away. The dialogue mix is also well balanced with the soundfield which I am happy to report.

I highly recommend purchasing ‘1408’, it is a great Stephen King short story brought to the silver screen in a way that builds tension in many places of the film. John Cusak pulls out a star studded performance since his last great film, ‘Identity’. With a good video transfer and excellent audio transfer, this is great option to replace your DVD version.