One of Sam Peckinpah’s most controversial efforts, Straw Dogs came out at a critical moment in the early 1970s, released in the same month as both Dirty Harry and A Clockwork Orange, causing a furor over film violence. Based on a little-known British novel, the film casts Dustin Hoffman as a bookish American mathematician on sabbatical in rural England, in the town where his young bride (Susan George) grew up. He finds himself forced to defend his home against an assault by local toughs, and discovers a frighteningly feral and vicious side to himself. Though Straw Dogs has a reputation for graphic violence, it actually looks tame by contemporary standards. Instead, the violence is psychological, and the suspense and shocks are induced by the editing–you’re more terrified by what you think you see than by what you are actually shown. 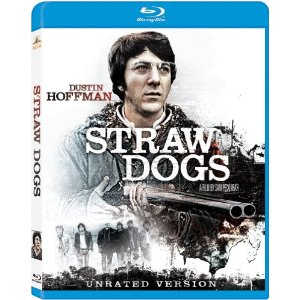 The whole time I sat through `Straw Dogs’ I was uncomfortable; not in a bad way though. Director Sam Peckinpah does a phenomenal job of making every sequence feel more and more unnerving, even if the violence and terror doesn’t truly take place until the tale end of the film. You feel dirty, almost as if you were a voyeur taking a peek in on the lives of this beautifully conflicted couple as they expose themselves to you; flaws and all.

The film tells the story of David and Amy Sumner, a young couple who moves to rural England while David is on sabbatical. Amy once grew up in the small town, and her new husband, the book smart yet socially clueless mathematician, is less than welcomed by the community. As David immerses himself in his work his relationship with his wife begins to strain until she finds herself taunting the eyes of a local ex-boyfriend who happens to be helping fix up the Sumner’s home. This teasing can only go so far before it takes a turn for the worse, and when a seemingly mutual tryst goes all sorts of wrong it paves the way for the Sumner’s new life to come crashing down on them.

The film is breathtakingly honest and brutal in its delivery; very gritty and raw. There are scenes that are very hard to stomach, not necessarily because they are gruesome or explicit (the violence is mild compared to the horror movies of today) but because each and every scene feels real.

The acting aids in this feeling of reality, especially from the two leads, Dustin Hoffman and Susan George. I personally feel that George is the standout here. Her characters development is very passionate and convincing. The big pivotal `tryst’ scene is the best acting in the entire film; the confliction (`do I want to, yes, no, yes, no’) and then raw emotion is utterly mesmerizing. Hoffman is also very good here, some of his best work really. He captures his characters sense of justice, and as the film escalates into the pits of violence we see his views change drastically, yet always convincingly.
Movie Quality: 9.5/10

The print is presented in 1080p/AVC MPEG-4 with a 1:85:1 aspect ratio. For a film that is 40 years old, MGM has pulled off a feat in cleaning up the print and making it look very good on Blu-ray. MGM didn’t try to do any tricks here with this transfer as some studios do at times with older films like adding some DNR or EE to try and make the film look as crisp as possible. Colors are good, but soft in many scenes. The strongest part of the print has to do with the clarity and details. Grain structure is intact throughout the film and vary at times with them being stronger later in the film. I think the grain really helps with the grit of the film. Black levels are deep and really shows off in the darker scenes. This print is close to receiving a perfect score with a few of the smaller issues being fixed such as some slight print damage which isn’t as noticeable.
Print Quality: 9.5/10

The audio is presented in a DTS-HD Master Audio 5.1 mix. This is a film that is very front heavy based on the original mono track. Those that love the original mono sound design, you will not be upset to say the least here. The score is what encompasses the use of the rears to fill the soundfield. Dialogue comes through the center channel very clear and crisp.
Print Quality: 8.5/10

There is much to be said about this film and its powerful impact. One can easily draw the moral code being flaunted throughout the piece; a certain warning against acting on our imperfect desires and impulses. If you are a fan of this film and own a Blu-ray player, you owe it to yourself to add the Blu-ray to your collection. My only real issue with this disc is that it is missing a lot of the excellent special features found on the 2 disc collection by Criterion.
Overall Rating: 8/10