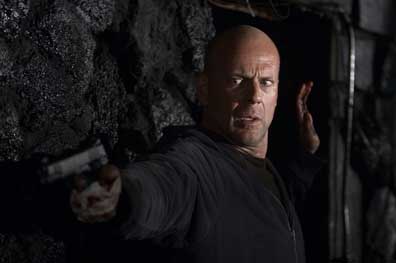 Action extrordinaire Bruce Willis (Die Hard, Pulp Fiction, The Sixth Sense) stars as Jeff Talley, a big city hostage negotiator who voluntarily trades trauma for house calls when he becomes Chief of Police in a sleepy town. But when a random crime escalates into a deadly standoff, Talley finds himself thrust into a situation far more volatile and terrifying than anything he could ever imagine! Also starring Kevin Pollack (The Usual Suspects, The Whole Nine Yards), Jonathan Tucker (The Texas Chainsaw Massacre) and Ben Foster (3:10 to Yuma, The Mechanic), this explosive hit packs the punch in more ways that one. 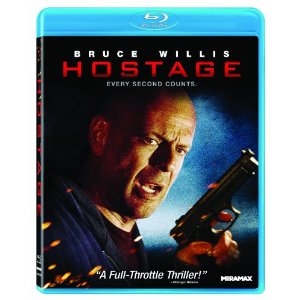 Scorching performances sear ‘Hostage’ with fiery intensity, and a unique perspective and edge, I feels goes into fresh territory for action films like no other action film has before it. A film that will leave a lasting impression on you and any built up hostility you held for action films in the past shall be expelled from you when you view films like this in the future. It also gives its star Bruce Willis the leverage he’s going to need when facing three lost renegade youths who pull one stunt with two physical motives, when they happen to come upon a flashy car and an attractive girl, that soon fuels a twisted psychosis. The three teenagers Mars Krupcheck (Ben Foster), Dennis Kelly (Johnathan Tucker), and Kevin Kelly (Marshall Allman) are younger then the novel to parallel the tragic Columbine shootings of 1999, and give a voice to the current generation, and the dangerous road we all could be headed down.

It is through this seemingly isolated incident that two families are taken hostage on both sides of the social spectrum, and put in jeopardy with dire consequences for each of them if an agenda is not met. The first hostages being a wealth established unit headed by father Walter Smith (Kevin Pollock), young son Tommy Smith (Jimmy Bennett), and daughter Jennifer Smith (Michelle Horn). The other family in disarray and in need of redemption consisting of Jeff Talley (Bruce Willis), Jane Talley (Serena Scott Thomas) and Amanda Talley (Bruce’s real-life daughter Rumer Willis) from an unknown danger.

Every possible genre is explored in a whole new setting with emphasis on Westerns and the films of the 30s, 40s, and 70s. Every scene plays out like a well-written book this film is based on, and has inspired me to read the novel after viewing the film. Warm colours mixed with shadow give surroundings a great ambiance, and actions a striking fluidicity, that charge well-crafted characters with a pulsating energised current, to spark their actions and see them through to a gothic and operatic crescendo.
Movie Quality: 9/10

The print is presented in 1080p/AVC MPEG-4 with a 2:35:1 aspect ratio. The print looks very good throughout without any apparent issues. Colors are vibrant and carry pop which brings out the fine details. The detailed scenes stand out very well. Blacks are deep. I found the print to be crystal clear with no artifacts or print damage. The darker look and feel of the film looks great with the appropriate lighting making this film standout.
Print Quality: 9.5/10

The audio is presented in a DTS-HD MA l0ssless 5.1 mix. I was immersed at all time throughout no matter if it was special effects or dialogue. The depth of the dialogue is well done through the center channel sounding very clear and crisp. The action sequences sound nice and expansive in the sound field with plenty of action panning through all the speakers. Then add the special effects with hard hitting, bullets flying and fighting scenes this adds to the atmosphere.
Print Quality: 9/10

Florent Siri’s Hostage is not a perfect film and at times its increasing tension without any form of release can be unbearable to some people, but it succeeds well enough as a thriller.
Overall Rating: 8/10