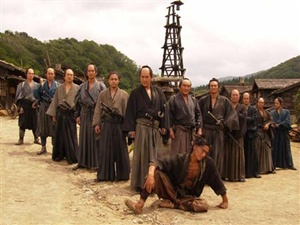 Cult director Takashi Miike (Ichi the Killer, Audition) delivers a bravado period action film set at the end of Japan’s feudal era. 13 Assassins – a masterful exercise in cinematic butchery (New York Post) is centered around a group of elite samurai who are secretly enlisted to bring down a sadistic lord in order to prevent him from ascending to the throne and plunging the country into a war torn future. 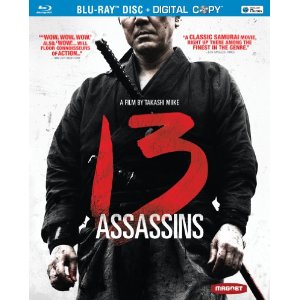 13 Assassins is a contemporary version of Kurosawa’s “Seven Samurai” (1954), inflated I guess, to adjust for the times. Although the theme is different, it is basically a small band of warriors intent on doing good and battling a much larger force of evil doers. The important thing in a film like this is that there be a minimum of exposition and a maximum of sword play and daring do, and that the quality of the battles be exquisite.

It’s hard to view a film like this without thinking of Kurosawa’s Samurai films and, of course, Toshiro Mifune (1920-97), who played a central role in many of Kurosawa’s best films. Mifune made 16 films with Kurosawa (“Seven Samurai”, Yojimbo”, “Sanjuro”) and without Kurosawa made the “Samurai Trilogy” with Hirtoshi Inagki.

Koji Yakusho (1956) has the main role. Yakusho has been in nearly 100 films and is a favorite of director Kiyoshi Kurosawa (“Memoirs of a Geisha”, “Babel”) who is not related to Akira Kurosawa.

The film is directed by Takashi Miike (1960) who is known for the extreme violence in his dozen plus films (“Triad Society”, “Dead or Alive”, “Ichi the Killer”). Miike won the Japanese Professional Movie Awards as Best Director for “Ichi” (2002) and “Rainy Dog” (1997) and was twice nominated for a Golden Lion at the Venice Film Festival.

At 2 hours plus the film is a little long, and the initial set up could perhaps be shortened. But once the action gets started, it is non stop and there is no time for a bathroom break. Mike gives us an assortment of warriors using an assortment of weapons, but at some point, more is less. It’s hard to keep track of who is dying, and with 13 Assassins instead of 7 Samurai, the impact of the death of each is substantially lessened.
Movie Quality: 9/10

The print is presented in 1080p/AVC MPEG-4 with a 2:40:1 aspect ratio. The image quality is excellent and crystal clear. I found colors to be rather rich, but this can also be a very drab looking film. Black levels do not hold up quite well as I would have hoped. There are some scenes that take place indoor and the blacks don’t look inky. 13 Assassins video transfer will easily satisfy the biggest videophiles to the casual observer. Magnolia does a top notch transfer with 13 Assassins that will in the end gratify the viewer.
Print Quality: 9/10

The audio is presented in a DTS-HD MA l0ssless 5.1 mix. Sorting a beautiful DTS-HD Master Audio 5.1 surround soundtrack, 13 Assassins explodes onto blu-ray. The movie comes to life with its action scenes of car chases, one on one combat, to simple dialogue. No clouding in any scene nor is any dialogue muffled by music or drowned out by action sequences. Audiophiles will be happy with this mix.
Print Quality: 9.5/10

This movie was a lot of fun It doesn’t get overly gory and has well shot fight scenes that are realistic. Unlike some Samurai films, this film depicts dissatisfaction of members the samurai class.
Overall Rating: 8.5/10