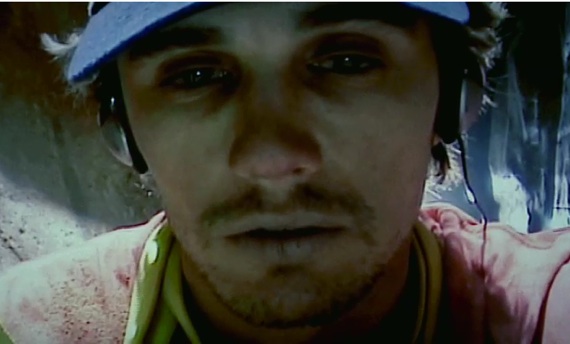 From Academy Award®-winning director Danny Boyle (Slumdog Millionaire) comes the powerfully uplifting true story of one man’s struggle to survive against mountainous odds. Aron Ralston (James Franco) has a passion for all things outdoors. But when a falling boulder traps him in a remote Utah canyon, a thrill-seeker’s adventure becomes the challenge of a lifetime. Over the next five days, Ralston embarks on a remarkable personal journey in which he relies on the memories of family and friends–as well as his own courage and ingenuity–to turn adversity into triumph!

The remarkable true story of Aron Ralston, a hiker who spent 5 days trapped in a ravine in Utah when a boulder pinned his right arm seemed destined for a big screen adaptation from the instant that the story broke. Here was the remarkable tale of a man who cut off his right arm with a dull knife rather than suffer a slow, excruciating death. The big question mark was whether or not Hollywood would do the story justice and make a film worthy of the incredible events or if it would get mucked up with gobs of hokey sentimentality and life affirming dreck. It turns out that the former is the case.

Danny Boyle (Slumdog Millionaire, Trainspotting, Shallow Grave) brings his kinetic directorial style to this terse, emotionally raw thriller. James Franco stars as Ralston, and delivers the performance of his career so far. Franco has loads of talent, but I think its fair to say that up to this point in his career he has tended to coast by on his charm and bad boy persona in a series of roles that have found him doing riffs on the same character type: the dark, brooding, underacheiving rebel. In 127 Hours, however, he stretches further than he ever has before and the results are electrifying. Franco is given the burden of carrying this tense film on his shoulders and he is more than up to the task. He effortlessly conveys the fear, sorrow, deseperation and will to survive of a man who is cut off from all human contact (a character flaw that contributes to his predicament) and struggles to maintain his sanity and find a way out of the ravine.

Boyle’s direction is spot on and the film is lean and economical. Precious little time is wasted on filling in Aron’s backstory or providing a psycholgical profile. Instead, we learn everything we need to know about who he is and what makes him tick during the time he spends stuck in the ravine. Ralston’s fear of dying forces him to evaluate his own faults and reflect on his past relationships and mistakes via a series of recordings he makes with his digital camera. It’s just as emotionally draining to watch Ralston bare his soul as it is to see him eventually amputate his arm and climb out of the ravine as a stronger man with a new perspective on life. Again, it is Franco who is given the difficult job of conveying all of this and he delivers. It is a shame that he was not given an academy award for this performance (no offense to Colin Firth).
Movie Quality: 9.5/10

The print is presented in 1080p/AVC MPEG-4 with a 1:85:1 aspect ratio. The print looks very good throughout without any apparent issues. Colors are vibrant and carry pop which brings out the fine details. The detailed scenes stand out very well. Blacks are deep. I found the print to be crystal clear with no artifacts or print damage. The darker scenes of the film looks great with the appropriate lighting making this science fiction film standout. Even the documentary look and feel at the beginning had a nice feel to it showing some excellent details which I did not expect.
Print Quality: 9/10

The audio is presented in a DTS-HD MA lossless 5.1 mix. For those going in expecting an intense and complex audio experience you might be a little disappointed. There are special effects and the soundtrack peer through the rears providing some panning effects. It is done so well that you feel as a part of the experience. While this is not a bombastic soundtrack, it is well executed. I did have a few issues with the dialogue being soft in a few spots, but overall it is well done.
Print Quality: 9/10

In the end. 127 Hours is a film that inspires hope and instills a sense of appreciation for just how precious life is and how important the people we share it with truly are. It would all be completely corny and ridiculous if it weren’t true.
Overall Rating: 9/10