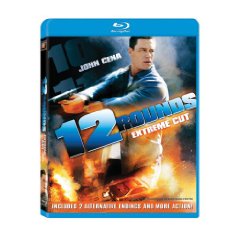 Police officers Danny Fisher (Cena) and Hank Carver (Brian White) are out on patrol when they get word that the FBI is tracking international terrorist, Miles Jackson (Aiden Gillen, HBO’s “The Wire”, the British version of “Queer as Folk”) through the French Quarter. Danny is a little out of it as he and his girlfriend, Molly (Ashley Scott) have just moved into a place, together, living together for the first time, and she is already talking about marriage. Driving through the Ninth Ward, they come to a red light next to a BMW driven by a beautiful woman. Danny quickly realizes he has seen this woman in surveillance footage of Miles, she is Miles’ girlfriend, and they pursue the car. One thing leads to another and these two officers, but more so Danny, have arrested Miles and his girlfriend is dead. A year later, Danny and Hank have been promoted to Detective and still work together trying to keep the streets of New Orleans safe. As Danny leaves his house, he gets a phone call from Miles. Miles has escaped from prison and wants to play a little game. If Danny follows the instructions and is successful, he will get Molly back. Miles wants to take away the thing Danny loves most in retaliation for the death of his girlfriend.

The director Renny Harlin certainly does a better job with action movies than the bad directors who were hired to do big summer movies this year. But this movie doesn’t give us much of anything new. It is Speed meets Die Hard with a Vengeance, meets Blown Away. While John Cena has the look of an action star but lacks the charisma of The Rock in the ring and on camera. His expression hardly ever changes as well. Aidan Gillen does a fine job as the villain though since he makes us want to see him get what’s coming to him.

And then there’s the dialogue, which is really nothing more than a collection of shallow one-liners and cliché cop statements. Pretty much all of the latter is heard between Fisher and his partner, Detective Hank Carver (Brian White), who seems less like a developed character and more like a plot convenience.
Movie Content: 6/10

The print is presented in 1080p/AVC MPEG-4 with a 2.35:1 aspect ratio. Color is vibrant and bold in this transfer. A very good example of that is the color red, when blood splats on the floors, walls, and in the air. The film is so colorful that it is very good in details. There are also moments though where the transfer does lack in a few areas. Lighting was a problem in a few scenes where there appeared to be too much light in the background.
Video Quality: 9.5/10

The audio is presented in DTS-HD MA lossless 5.1 mix. This is a demo worthy mix that could easily sell those on the fence about the format. The soundfield is immersive at all times no matter if it is the special effects or dialogue. I was literally amazed with the amount of bullets panning from each speaker in the rears. It sounded as if there were bullets ricocheting off of the walls in the room. Bass was punchy as it shows with the amount of gunfire and explosions. Dialogue is also well placed in the center channel sounding crisp and clear. The best part of this all around aggressive soundtrack is that it is well balanced between the dialogue and sound effects.
Audio Quality: 9.5/10

I was not a fan of John Cena’s ’12 Rounds’, but the film does offer some decent action throughout. The video and audio are demo worthy material on Blu-ray which will not disappoint fans.
Overall Rating: 9/10