10 Things I Hate About You (Special Edition) Blu-ray Review

It’s, like, Shakespeare, man! This good-natured and likeable update of The Taming of the Shrew takes the basics of Shakespeare’s farce about a surly wench and the man who tries to win her and transfers it to modern-day Padua High School. Kat Stratford (Julia Stiles) is a sullen, forbidding riot grrrl who has a blistering word for everyone; her sunny younger sister Bianca (Larisa Oleynik) is poised for high school stardom. The problem: overprotective and paranoid Papa Stratford (a dryly funny Larry Miller) won’t let Bianca date until boy-hating Kat does, which is to say never. When Bianca’s pining suitor Cameron (Joseph Gordon-Levitt) gets wind of this, he hires the mysterious, brooding Patrick Verona (Heath Ledger) to loosen Kat up. Of course, what starts out as a paying gig turns to true love as Patrick discovers that underneath her brittle exterior, Kat is a regular babe. The script, by Karen McCullah Lutz and Kirsten Smith, is sitcom-funny with peppy one-liners and lots of smart teenspeak; however, its cleverness and imagination doesn’t really extend beyond its characters’ Renaissance names and occasional snippets of real Shakespearean dialogue. What makes the movie energetic and winning is the formula that helped make She’s All That such a big hit: two high-wattage stars who look great and can really act. Ledger is a hunk of promise with a quick grin and charming Aussie accent, and Stiles mines Kat’s bitterness and anger to depths usually unknown in teen films; her recitation of her English class sonnet (from which the film takes its title) is funny, heartbreaking, and hopelessly romantic. The imperious Allison Janney (Primary Colors) nearly steals the film as a no-nonsense guidance counselor secretly writing a trashy romance novel. 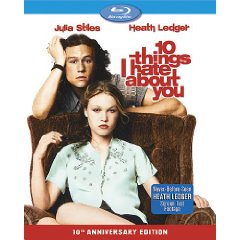 The story is based on Shakespeare’s Taming of the Shrew. It is about two sisters, one very popular, Bianca Stratford (played by Larisa Oleynik) and the other, Katrina, or “Kat” (played by Julia Stiles) hated because of her gruff character. Their overbearing father (played by the hilarious Larry Miller), devises a scheme whereby Bianca cannot date until rebellious Katrina does, which seems an impossibility. Thereby is set up a scheme to pair Katrina off with the roguish Patrick Verona. One of the masterminds of this plot is Cameron James (played by Joseph Gordon-Levitt), a newcomer to Padua high, where the movie takes place. The other is his assistant of sorts, Michael Eckman (played by David Khumoltz).

Though somewhat predictable, especially if you have read Taming of the Shrew, it is an interesting light diversion. The dialogue is quite well done, intertwining a word or phrase from Shakespeare with modern teen slang. Other odes to Shakespeare are seen in Kat’s friend who idolizes him as if he is a teen heartthrob, plus reading of his works in one Kat’s classes. The timing in the dialogue is also very Shakespearean (for a comedy). It’s Very rapid fire. I think both David Khumoltz and Larry Miller are amazingly funny!
Movie Quality: 8/10

The print is presented in 1080p/AVC MPEG-4 with a 1.85:1 aspect ratio. For a film that is pre-high definition era, the print is pretty good, but it is uneven throughout on Blu-ray. There are scenes where the picture looks very clean and pristine with tiny hints of grain to times where there is much more grain to the print. The image is rather soft at some points of the film, but this is the best that this film has ever looked when compared to DVD.
Video Quality: 8.5/10

The audio is presented in DTS-HD MA lossless 5.1 mix. The audio presentation mix which is really good for a dialogue heavy film. My rear speakers were working fairly well during the noise from the party, but the center channel is going to get the most use with the dialogue driven parts of the film.
Audio Quality: 8.5/10

Overall, “10 Things I Hate About You: 10th Anniversary Edition” is a fantastic release for fans of the film. The Blu-ray may not have a lot of bells and whistles as I would have hoped for, this Blu-ray release is definitely an improved upgrade over the 1999 DVD.
Overall Rating: 7/10