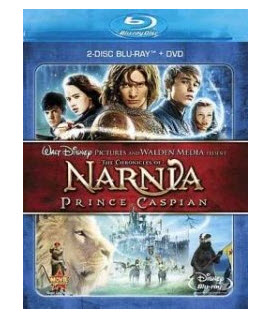 ‘The Chronicles of Narnia’ franchise is one that borders the world of reality and fantasy. I didn’t enjoy ‘The Lion, the Witch and the Wardrobe’ upon initial viewing since my expectations were rather high. The film was geared more towards the younger crowd. The production team went back with ‘Prince Caspian’ opening it up to audiences of all ages. ‘Prince Caspian’ would total a world wide box office gross of $419 million dollars surpassing the original film.

‘Prince Caspian’ takes place a year after the events of ‘The Lion, the Witch and the Wardrobe’. We see that Narnia is in a war torn state. We get a glimpse of Narnia with what is to come; we are taken back to London with Peter (William Moseley), Edumund (Skandar Keynes), Lucy (Georgie Henley), and Susan (Anna Popplewell) our heroes from the original film. They find themselves back into the world of Narnia with the Prince’s calling, which he doesn’t realize he has called them. A year has been a lengthy absence as once they come back to Narnia; they soon learn that the evil King Miraz (Sergio Castellitto) is the ruler. They realize at that point that their one year in time is equal to 1300 years in the Narnia world. There is a huge difference in time as more than a millennium has passed.

The effects are first rate in ‘Prince Caspian’ which I felt was on the very low end with the first film. I felt immersed at all times with the film. This is one very atmospheric film which I feel is what the original was lacking. I will get a lot of flack for saying that, but this is what made me not appreciate the original film. Everything about this film is just absolutely gorgeous from the landscapes, forests, vegetation, Telmarine castle, and I could go on and on. Do not get me wrong, ‘The Lion, the Witch and the Wardrobe’ was a good film but ‘Prince Caspian’ is a great film all around.

The animated animals of Narina look and are fantastic. I found the sword-fighting mouse (Eddie Izzard) to be a nice addition to the film. They added another element to the film considering that they also had a nice amount of screen time vocally. We also have badgers, bears, Minotaurs, amongst many animals added into the mix. They add a nice touch in also bringing the fantasy world of Narnia to life.

With more action being infused into the film, this is a definite plus in my book. The battles were very well done and it helped make this feel more like there was an ongoing war. I give kudos to the production team for bringing all this to life in the film.
Movie Content: 4.5/5

Print/Audio Quality
The print is presented in 1080p/ AVC MPEG-4 codec with a 2.40:1 aspect ratio. WOW! is about all I can say about this transfer. Disney knocks yet another one out of the ballpark this holiday season. Wall-E on Blu-ray was fantastic looking and now with ‘Prince Caspian’, the picture quality is breathtaking. The CGI incorporated into the film fits with the live action very well. There isn’t a hint of any issues between both and is well balanced in the print. Colors are bright throughout the film. Blacks are also very deep and strong with quite impressive details. Any of the darker scenes outside have this beautiful blue tint giving the film a rather unique look. The image is pristine as there isn’t a hint of film grain. Granted there is CGI throughout the film, there is a nice 3-D image from the quality of the print. Like I said earlier, this is one of those demo reference films that will make viewers drop their jaw to the floor.
Video Quality: 4.5/5

Audio quality is presented in DTS-HD MA lossless 7.1 mix. Like the print being reference quality, the audio comes rather close. The soundfield takes advantage of the rears and front speakers with the special effects giving the viewer the feeling that they are right in the middle of the action. This is one immersive experience during the battle scenes with all out fighting and destruction of Narnia. Bass is also very well managed with a very bombastic sound.
Audio Quality: 4.5/5

‘Prince Caspian’ is reference material with top notch video, sound, and special features on Blu-ray. This sequel does a great job with atmosphere and the inclusion of more special effects than the first film brings the world of Narnia to life. The image quality screams 3D in so many areas that it feels like the actors are jumping right out at you.
Overall Rating: 4.5/5

« ‘The Messenger: The Story of Joan of Arc’ Blu-ray Review
‘Encounters At The End of the World’ DVD Review »