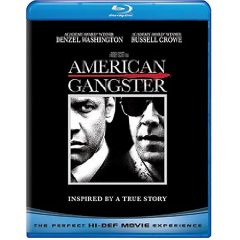 Every few years we get a very good mobster movie that comes along and lifts you off your feet. Ridley Scott with Denzel Washington and Russell Crowe almost accomplish that in ‘American Gangster’. ‘American Gangster’ is a well done film, but there are some issues with the direction that Scott takes that throws off the film from being a true classic. I never had the opportunity to see ‘American Gangster’ in the theater, so this was one of my most anticipated releases to hit Blu-ray. Before the movie released theatrically and on home video, I read plenty of reviews that either loved this movie or thought it didn’t hold a candle to the mobster classics of the silver screens past.

Scott takes the tale of Frank Lucas, a real life heroin kingpin, and makes an entertaining almost epic like movie. ‘American Gangster’ is centers around Lucas and his rise to power in Harlem during the 70’s. This movie isn’t just about Frank Lucas (Denzel Washington); it also follows the life of Richie Roberts (Russell Crowe), the cop that is obsessed with putting Lucas behind bars. This is where Crowe’s character not is only hell bent on busting Lucas, but has to battle the corruption in his own department that is causing him to not be able to get to Lucas. Denzel plays this role so well and proves that just about any role that he plays, it helps turn any movie to magic.

Some of the magic ends due to Scott’s way of pacing ‘American Gangster’, there are times where this movie just feels like it is moving way too fast. I can’t place my finger on it, but when comparing this to ‘Godfather’, ‘Scarface’, ‘Goodfellas’, ‘Carlito’s Way’, and ‘The Departed’ it is one of those movies that is moving on rapid pace and you feel certain things were rushed to the point where the cast, except for Lucas and Crowe, don’t reel you in. When you look at the casts of the movies I mentioned, ‘American Gangster’ is nowhere near their level and I think that this affects the movie. Even when you don’t have a strong cast, I think that better character development could have been achieved here.

Russell Crowe just didn’t seem to be the best fit for this part. Crowe just seems like he is falling asleep or just going through the motions, it just kills the character. Personally, I would have gone with someone younger, say a Mark Wahlberg as he has played these kinds of roles very well in the past. Granted Crowe isn’t at his best here, he still pulls a good performance.

Print/Audio Quality
The film is presented with both the 156-minute theatrical release and the 176-minute Unrated version. The print is presented in 1080p/VC-1 video with a 1.85:1 aspect ratio. I really like the gritty look of the film as it depicts the 70’s style of film making. The colors don’t pop off the screen as the style used here has a fine soft look. Details are good and it shows with the print. I found the picture quality to be very similar to the HD DVD release.

The audio is presented in a DTS-HD MA lossless mix as the HD DVD had a Dolby Digital Plus mix. I found the soundfield to be greater during any scenes that pushed the rears. The subwoofer wasn’t being used as much either. The dialogue portions of the film come through very clean. My front speakers were carrying most of the load, but this is more of an improvement over the HD DVD release, but not by much.

‘American Gangster’ is just a notch below the other 5 mobster movies that I mentioned earlier. This is one of those movies that will either become a ‘cult’ hit over time as did ‘Scarface’ or just be a great mobster movie that people will talk about, but not rave. I highly recommend ‘American Gangster’, even if it is a rental and not a purchase but this Blu-ray version is the ultimate edition with both cuts available in high definition.