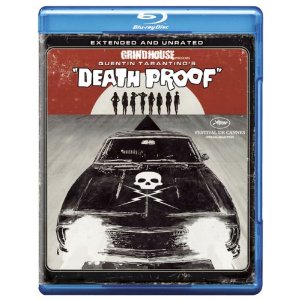 It’s another go around at the Grindhouse as I brought everyone our review of ‘Robert Rodriquez’s Planet Terror’ last week. The second part of the recent Grindhouse theatrical releases is ‘Quentin Tarantino’s Death Proof’. ‘Death Proof’ is a wild ride that will have you jumping out of your seat more than a handful of times. Tarantino returns with a “balls to the wall” action film that is also dialogue driven not shying too much away from his well known formula of writing and directing. This is a film that may work for some and not others as it does have spans where dialogue rules the screen. That is the greatness of Tarantino films, they allow for the dialogue to flesh out the story in more ways than one could imagine.

We have a group of friends Jungle Julia (Sydney Tamiia Poitier), Arlene (Vanessa Ferlito), Shanna (Jordan Ladd), are hanging out with friends in a bar. The girls dislike the beach blonde Pam (Rose McGowan) sitting right across the bar. Enter the psychotic villain of the film, Stuntman Mike (Kurt Russell) who has a nice charm about himself that is so ever deceiving. Mike offers to give Pam a ride in his muscle car that the girls are so ever goggling over. Mike built this vehicle to also have a roll cage in it, but that is something that only protects the driver. He takes Pam for one wild ride in the vehicle which he is driving faster than sitting on a rollercoaster ride. I couldn’t stop laughing when he turns around to Pam telling her that only one side of the car is death proof, his.

Stuntman Mike gets into some trouble with the local police as Sheriff Earl McGraw (Michael Parks). The funny thing is that nothing ever happens with Mike and he walks away from the hospital with no trouble. Earl’s son Edgar McGraw (James Parks) wonders as to how this guy can get out so easily. The hillbilly cops do not seem to care about allowing this maniac back on the streets because it would be more work to convict him.

Stuntman Mike is back on the streets for round two as he finds another set of girls which he has plans for. These girls are Kim (Tracie Thoms), Abernathy (Rosario Dawson), Zoe Bell (herself), and Lee (Mary Elizabeth Winstead) as they become a bit more than he can handle. These girls are an adventurous bunch as they have done stunt work in the past. As they sit in the dinner Zoe mentions the fantasy she has with a 1970 Dodge Charger that reminds her of the vehicle from ‘Vanishing Point’. Zoe wants to play ships mast (they don’t know about her plan). The girls are riding out to this guys place as Stuntman Mike is following them. Mike has no clue as to what these women are capable of and that they might be even more insane than him. The girls leave their car and a fallen asleep Lee with the guy to just take the Charger out for a ride.

These nutty girls are not interested in purchasing the car; they are interested in performing crazy stunts using the Charger. Zoe and Kim are the two girls that perform the stunts on the Charger while Abernathy is driving. I could not believe the entire time some of the stunts these girls were pulling off and it had me sitting there scared out of my mind. Imagine if any of these stunts went horribly wrong during the filming, these girls would have been killed. Then Stuntman Mike emerges again on the scene as the girls are putting on a stunt show. He starts ramming into their car and chasing them up and down the desolate dirt roads. The girls begin to fight back at Mike as he at first finds it shocking, but exciting as a thrill ride himself.
Movie Content: 4.5/5

The print is presented in 1080p/AVC MPEG-4 with a 2.35:1 aspect ratio. The first half of the film carries the most intentional digital print damage. The second half of the film is in Black & White and then transitions into color. Colors are bold and vibrant once the color presentation transitions in trying to achieve that Grindhouse feel and effect. Blacks are deep. Expect intentional digital print damage throughout as the same could be said for the amount of grain that is filtered in. It never hinders the quality of the print with the intentional issues.
Video Quality: 4/5

The audio is presented in Dolby TrueHD 5.1 mix. The film overall takes well advantage of the TrueHD track. With this film being more dialogue driven, the voices through the center channel are rather clear and crisp. When we have Stuntman Mike chasing the girls, we get more from the rears as they dynamically pan from one side to the other. Bass is also deep shaking the floor when Mike hits the Charger with his car. It helps add that intensity during the scenes when Mike is going after the girls. The score and soundtrack sound also sound very good utilizing the soundfield, but with a more front heavy appearance.
Audio Quality: 4/5

‘Death Proof’ is my favorite of the two Grindhouse releases by Tarantino and Rodriquez. The dialogue scenes are just excellent providing some entertaining moments. I recommend upgrading from DVD to the Blu-ray version as this offers some slick visuals and excellent audio maintaining that Grindhouse feel.
Overall Rating: 4/5 (Purchase)