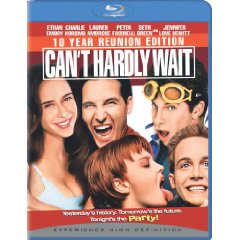 ‘Can’t Hardly Wait’ is a comedy that is celebrating it’s 10 year anniversary in 2008 as Sony Pictures has released the film on Blu-ray for the first time. While this comedy follows formulas of some of the later 80’s teen comedies and a few from the very early 90’s it really comes into its own film and even is used as a template for what some comedies would follow in the 2000’s. Even 10 years later, ‘Can’t Hardly Wait’ still holds up as one of those comedies that you can keep on coming back to for much needed laughs.

The story revolves around a huge party by the High School Seniors as this is their final hurrah together as a class to party their brains out. While we have many overlying storylines that are key to the film, there are also a lot of secondary smaller stories going on that really brings the film together on a positive note. The main plot of the story centers on Preston Meyers (Ethan Embry) and his love at first site of Amanda Beckett (Jennifer Love Hewitt). Preston is the nice boy on the block that has one goal at this party and it is for him to let Amanda know how much he likes her. Preston even has his thoughts written on paper as to how he feels about Amanda, but will she ever get to read that note? As this is our central story, there are many other ongoing stories throughout ‘Can’t Hardly Wait’.

Amanda Beckett was going out with Mike Dexter (Peter Facinelli), the popular jock at the school. Mike has this notion in his head that he needs to break up with Amanda as they are going to be heading off to College, because the girls are going to be coming at him twice as much as they did in high school. Mike has this plan with his friends that they all need to break up with their girlfriends before the night is over with at the party. Guess who the last laugh is on? Mike is that jerky jock that you wanted to pop in the face in high school.

Then we have Kenny Fisher (Seth Green) with his group of friends, whom act as if they are white hip hop rappers. These guys are so hilarious and at one point his friends offend a group of black guys at the party because of how they were acting and what they said. Kenny has brought his love pack to the party, which is a back pack filled with all kinds of love toys, condoms, etc. because tonight is the night he loses his virginity. Then enter Lauren Ambrose (Denis Fleming) who is friends with Preston, ends up talking with Kenny the rest of the night, but not by choice. What is the deal here?

The band is hilarious that they have at the party, not once do they get to play a song due to bickering amongst each other. It is so funny, that they decide to break up right than and there at the party. They even went as far as getting blue t-shirts made for the band. It is hilarious to be seen. The nerd, Charlie Korsmo (William Lichter) who gets so drunk at this party becomes the life of the party at one point when he starts singing to Guns N’ Roses. Then all of a sudden, he starts to get some of the girls at the party that he would have never of gotten. Even hilarious is that his friends have been waiting outside of the party for some mischief that goes a little bit wrong.

‘Can’t Hardly Wait’ is presented in 1:85:1 1080p transfer. For a film that is pre-high definition era, the print is pretty good, but it is uneven throughout on Blu-ray. There are scenes where the picture looks very clean and pristine with tiny hints of grain to times where there is much more grain to the print. The image is rather soft at some points of the film, but this is the best that this film has ever looked when compared to DVD. ‘Can’t Hardly Wait’ also has a Dolby Digital True HD 5.1 mix which is really good for a dialogue heavy film. My rear speakers were working fairly well during the noise from the party, but the center channel is going to get the most use with the dialogue driven parts of the film.

‘Can’t Hardly Wait’ is one of the better comedies from the 90’s that still holds up very well in 2008. If you are looking for a night of laughs, you can not go wrong with this film as there isn’t even a person in this cast that hampers the film. Jennifer Love Hewitt, who is the bigger star here doesn’t even have that large of a role. I highly recommend either renting or purchasing ‘Can’t Hardly Wait’ since it is one of the better comedies.